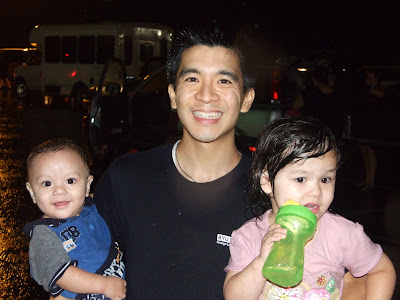 On Saturday night, we went to Stone Mountain for the laser show. We were sitting out on the grass watching when it started to sprinkle. Several people got up to leave and I thought, "What weenies that they can't handle a little sprinkle." Within minutes their judgement was supported. It began to pour We're not talking just any rain. It was big-dropped, get-soaked-to-the-bone-within-5-minutes kind of rain. The kind in which you'd skip down the street for fun. Anyway, we had remembered an umbrella...in the car. I thought about going to the car, but it would have taken us 10 minutes to get there, and by then the rain would probably be over. So I held a frisbee over the baby's head and Kevin held the nursing cover over Alena. OK, I tried to hold a frisbee over the baby's head, but he kept grabbing it and putting it in his mouth. He was not bothered in the least by the rain. He didn't even seem to notice it. The people behind us (who had 3 umbrellas) were bothered that he was in the rain. Not enough to lend us an umbrella though. Just enough to mutter about us just loud enough for us to hear. Ah, people and their obsession with wanting to enforce their weather weenie-hood on babies all the time. It made me smile a little bit. But not as much as the rain itself. I love being outside in a downpour. So invigorating.
P.S. Dear Reasor's grandmothers, It was like 85 degrees still. No one was going to get hypothermia from this.
P.P.S. As you can see from the photo, by the time we got back to the car, the rain had pretty much stopped.

Hurray for a nice good soak in the rain! I used to go out in rain storms and get soaked to the bone just for fun. It's good for the kids!

I'm sure your kiddos loved it.

I love their faces!