I had lived without a piano for long enough. Since summer 2000, if I wanted to practice, I've had to leave the comforts of home to seek a piano on which I could practice - usually at church or in a practice room at the BYU School of Music. But sadly, it was more common that I went weeks or even months without playing a piano, let alone practicing. Whenever I'm near a piano, I want to sit down and play. However, I've learned that when you don't practice, you don't have anything to play. Or you end up just playing dumb things here and there. I want to be able to play music as I used to - good, classical music.

I've always valued an acoustic piano much more than a digital. The sound, the feel, and the intrinsic value of a traditional instrument. To me, a digital piano has never been able to replicate the experience of playing on an acoustic. However, there were other considerations. We plan to move a few times before settling down, and moving an acoustic is just more difficult and and risky, plus there's the issue of allowing the piano to acclimate, and tuning. Also, we wanted the option of turning the volume down and using headphones to practice, especially since the walls in our apartment are thinner than most. Finally, I've always wanted the ability to hook a piano up to a computer to transcribe & arrange music, and just to have fun. Plus, digital pianos have come a long way in the past 5-10 years.

We looked at some Yamahas, Rolands, & Kawais. We were quite impressed with the Yamaha CLP-240 and CLP-270, but not as much as with the Kawai CA-91. I must say that most of the digital pianos we played ($3000-4000 price range) had excellent key action. Gone are unweighted, spring-loaded keys - Yamaha's GH2/3 & Kawai's AWA Pro I/II work by gravity, and are weighted very similar to the keys of an acoustic. The Kawai's most distinguishing feature was its solid spruce soundboard, the board that resonates the sounds emitted from the strings in an acoustic. The result is a fuller sound, a characteristic lacking in most digital pianos. I can tell you that it does make a difference. (if you're interested, read more about it at: http://www.kawai.de/ca91_en.htm) We got it for a smashing deal, and it was delivered to our apartment on Thursday. 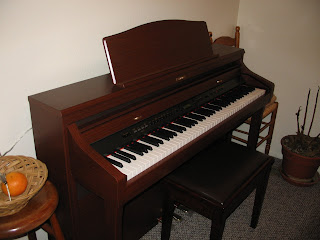 Despite a lack of space in our 1 bedroom apartment, we managed to make things work. We moved the Christmas tree from the dining room to the bedroom (and finally decided to rent a storage unit in our apartment complex), and in its place, made some room for a piano.

It's a beautiful piano, and it complements our decor very nicely. We're so excited that we can play (though Talyn won't play until the headphones that we ordered come this week). I can't promise that I'll be able to play as well as I did before, but at least I'll be practicing more than I have in the past 7 years!!

Love the piano -- congrats! I bet the soundboard is awesome!