Blog: I have to admit, it's getting better

I have to admit, it's getting better

Disclaimer: This entry is more of a journal entry to remember what's happening with Alena these days. I've got a bunch of stuff in it, since I haven't written in a while. It's more for me than for you. I understand if you don't think it's interesting. Someday it will be interesting to me and to my baby. But you don't have to feel bad. Sometimes she even puts her own Daddy to sleep. ;) 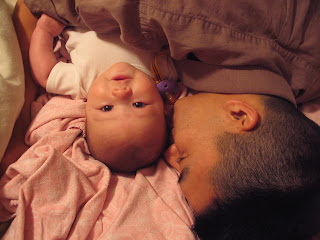 Once upon a time Alena ate an average of 11 times per day, for an average of 45 minutes each time. That comes to 8 hours and 15 minutes a day of nursing for me.
Now Alena eats about 7 times a day and takes about 30 minutes to do it. That comes to 3 hours and 30 minutes per day of nursing for me. At this point I heave a sigh of relief. (Unfortunately, because I've been nursing less, I've also stopped losing weight. Darn it! I'm the best at losing weight when I'm not trying to.) Look, we even had time to take this picture of her, because she wasn't nursing. :) 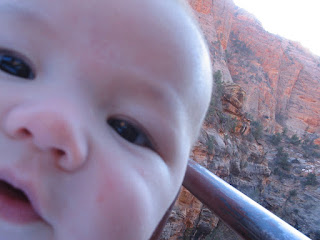 Once upon a time Alena smiled at us occasionally. (The books that say a baby can't smile for a few weeks are baloney. They certainly get better at it, and do it more often, and more often at you, but a mother knows when her baby is smiling.)
Now Alena smiles all the time, and she laughs. The first time she laughed was on October 28. We had just finished her bath and we were putting lotion on. Kevin came and just looked at Ally, and she just busted up laughing. I suppose he was dressed as a cow pie. Maybe she had just gotten the joke. It's still kind of that way. He has to do very little to get her to laugh. I probably get her to laugh more often, but it's because I work at it. Either Kevin's a natural comedian, or he looks funny. :)
Once upon a time Alena sat in the bouncer doing what looked to us like nothing.
Now she rolls over occasionally (the first time being October 24). She has only done it in front of me. I guess she's too busy laughing to do it for Dad. She also reaches very carefully and deliberately up to the toys in the bouncer, and has discovered how to put her pacifier into her mouth by herself. 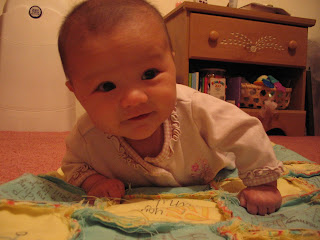 Once upon a time Alena screamed and cried in the tub.
Now Alena loves baths. She splashes, and sucks on washcloths and plays with My hand or Dad's watch.

Once upon a time Alena always wanted to be held.

Now Alena sometimes fusses because she wants to be left alone. She's very good at entertaining herself, and much of her happiest times are when she doesn't realize we're watching.

At this rate of improvement it won't be long before we have some Alena videos that are interesting to those of you who aren't this baby's parents. Just stay with us. Soon she'll be calling people "Cheap" just like Reuben.

I found this very interesting. In my head she is still two or three days old, and doesn't do anything. :)

Thanks for more video. Reuben loves them!

Hey Kevin and Talyn,
I found your blog :) Congratulations on the new baby (that isn't so new anymore) it's always fun to find out people you know have blogs too. :)
Happy Holidays
Noelle (Tanner) Bastian (as in Bryan Tanner's little sister)

Hi guys! I love the pictures! It's so fun to see how much Alena is growing up. I remember how nice it was when you felt like you weren't constantly nursing :)

Do you care if I put a link to your blog on ours?

I think your baby is so beautiful!! And the stuff she's doing is exciting and fun. I love when babies reach their little milestones in life. Sometimes, I even try to encourage my babies to get their sooner so I have something to tell people about them. For example, I like to put a trail of cheerios on the floor to get them to crawl. This really works, but only if they like cheerios and they're old enough to be able to crawl. :~)