That's what Alena called out to grandma when we returned her birthday phone call last Thursday. I think Alena enjoyed her birthday quite a bit, and she still plays with all of her presents every day. That to me is a sure sign of success.

We started out the day, as usual, at Lily's house. We walked in, and Lily's mommy asked, "What are you going to say to Alena?" Lily enthusiastically responded while running toward Alena, "We got you an umbrella!" I'm pretty sure she was supposed to say "happy birthday" but Alena was quite excited anyway. Probably more so than had she said "happy birthday." :) We then spent some time playing at the playground with three friends, which is pretty much the most exciting thing Alena could have asked for.

When we got home, Alena entertained a few birthday phone calls before we made her birthday brownies. (Why have cake when you could have brownies? It's a mystery of the world I may never understand.) I don't know why it has never even crossed my mind before to have Alena actually help me cook. Probably because I still sit around believing that she's a tiny baby. It was only about a couple of months ago that I started referring to her as a toddler. Anyway, it was a hit! 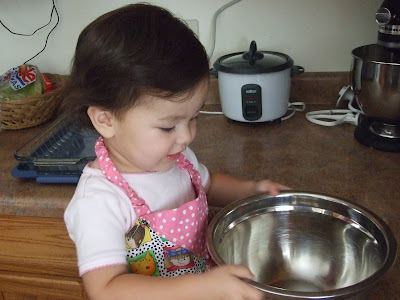 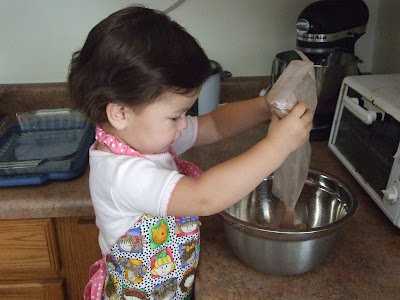 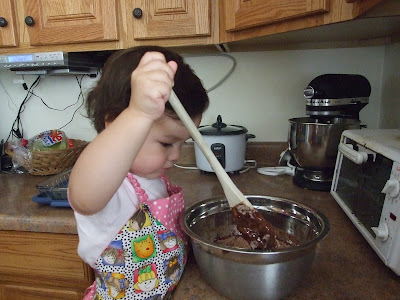 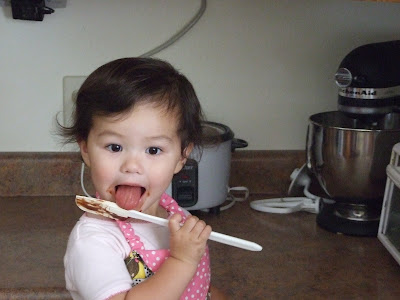 Not only did she enjoy it, but for the first time in her long, long life she posed for a few pictures. She was facing the wrong direction, and when I said, "Alena, show me your face." This is what she did: 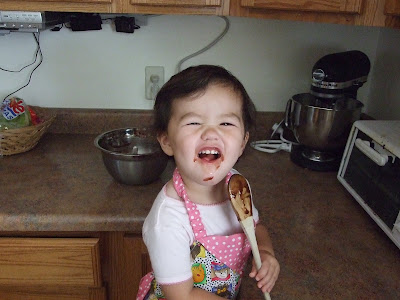 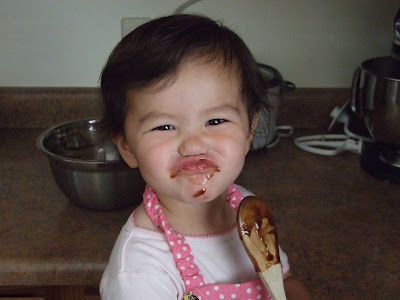 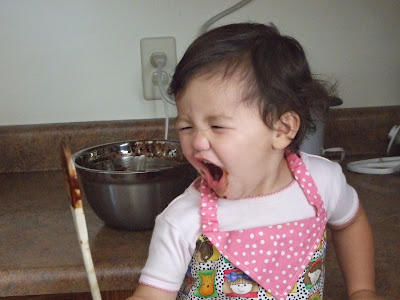 And there are plenty more where that came from. However, it seems to have been a passing notion. That or a birthday tradition. She hasn't done it since that day. She certainly loved licking that spoon, as any sane person would. She had never done anything like that before. (What have I been doing all these two years? She appears to have no life experiences!) I handed her the spoon after I finished scooping all the batter into the pan. She took one lick, and realized there was a gold mine sitting a few inches away. Thus the spoon went directly into the pan for a refill. I then got smart, and moved the pan. She informed me after I did so, "Mommy, I need more." She is certainly her mother's daughter.

Ok, everybody. Here comes the climax of the piece. I decorated the brownies. That's right, I Talyn Anti-Cutsy-Crafting Wong decorated the brownies. And if I do say so myself, I outdid myself. I may never again be able to make such a spectacular birthday dessert. Only time will tell. After dinner, Kevin and I sang Alena the traditional medley of birthday songs, and Alena chimed in the middle with some "La la la, Elmo song!!" for good measure. What say ye, Reasors? Shall we add it the the list? We then spent some time teaching Alena to blow out candles. She eventually managed to get one of them blown out and proceeded to have a lovely time opening gifts and playing with them. 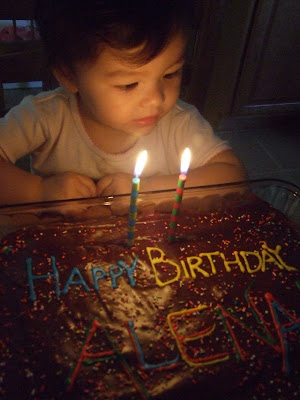 It was a lovely day, and it's been a fabulous two years with Alena.


P.S. Brecken, I considered inviting some of Alena's friends to play with her outside. Then I looked at my yard. It was covered in dangerous small child traps called trenches for a sprinkler system. It still is. Anyone want to come over and play with some PVC? I still have some brownies and I'm willing to share. (Even though their construction may have exhausted my lifetime supply of cute dessert abilities.)

Oh yeah, I agree, brownie is a way yummier cake - that's what I had this year. Nice decorating job.

Also, how could Alena have not helped you cook/bake thus far? Every time I go near the kitchen, Margo starts pushing the chair over to the counter shouting, "I mix! I taste!"

Sounds like a pretty good birthday to me, three friends at the park is a pretty big deal. :)

(What have I been doing all these two years? She appears to have no life experiences!)

Sometimes I feel the same way about Jordan.

Talyn!! She is SO BEAUTIFUL! Oh my goodness. I can't get over her. Why isn't my husband Asian?! Hahaha - Happy Birthday to Alena :)

AHH! What have you been doing Pa? I have no life experiences.

Happy Birthday, Alena! For some reason it didn't cross our mind to call. Maybe it's because we still think of her as a baby, and obviously she is not anymore!