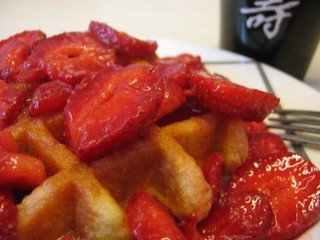 So, I assume youâve all heard of Belgian Waffles, but I have reason to believe that you really have no idea. Years ago my curiosity had me asking numerous people what the difference between a regular waffle and a Belgian waffle was. The best answer I could get was that a Belgian Waffle has deeper holes. While that is true, thatâs hardly even the tip of the iceberg.

There are three main types of Belgian Waffles. First gaufre de Bruxelles, second gallette, and finally gaufre de Liege. Iâve only tried two of the different kinds, but Iâve been doing my research. A Brussels waffle is rectangular and usually topped with powdered sugar and then whatever topping you want to pay for, ice cream, chocolate, and fruit (no syrup). I havenât tried one, but apparently theyâre lighter than gaufre de Liege. They do have deeper holes than the waffelâs weâre used to.

Gallettes are like waffle cookies. Theyâre small and round with very, very shallow holes. Theyâre the mother of waffle cones I think. You mostly buy them at the grocery store, whereas you buy the others either at the grocery store or at waffle stands situated wherever you decide youâre in the mood for a waffle. I had a couple of galletes this morning with chocolate spread. They were yummy.

Finally, the Gaufre de Liege, in other words Liege Waffles. These are by far the most predominant, and for good reason. Theyâre heavenly! They are nothing like any waffle you can get in our hemisphere. Theyâre crispy and soft and chewy and sweet and buttery and they have little sugar balls throughout. They average â¬1,50 each plain and hot, but you can find them cheaper. You can buy packages of them at the grocery store, although they arenât as good as fresh, theyâre still leaps and bounds above even the best Ego waffle youâve ever had. You can buy the same toppings you put on the Brussels variety. But, unlike any waffle youâve ever had, it needs nothing. You can eat it completely naked, and people do on far more than a regular basis. (You all know I mean that the waffle is naked, not the eater-of-waffle, although we are an Europe).

Naturally, I want the recipe to these guys, because none of you are ever going to believe how good they are until you can try them. So, I started looking for the recipe. I googled it just like any good wife of an IT graduate, and this is what I foundâ¦Lots of people looking for the recipe. However, in addition to all of that, I found a fraternity dedicated to promoting and defending the recipe. (ConfrÃ©rie de la Gaufre LiÃ©geoise) Thatâs right. Itâs a secret recipe!!

So, I thought, âBut how do all the street vendors have the recipe?â So I asked one. It turns out that the waffle franchises have to buy the dough already made. All the waffle makers do is take them out of the freezer and cook them. So, Iâve been looking around for the recipe, and I have found some that come close, but Iâm afraid that the rest of you are going to have to come here to try the real thing. Hereâs the best recipe we have so far. We want to experiment with a bit less yeast and maybe add a pinch of cinnamon.

1 Kg Farine pour pÃ¢tisserie (The closest you can get to that at home is cake flour)
350 g warm milk
100 g fresh yeast (not dried!)
4 eggs
20 g of salt
Â½ packet of vanilla sugar
500 g melted butter
500 g sucre perlÃ© (Those are the little sugar balls. You canât get them at home. Weâre thinking just break some sugar cubes in smaller pieces, but not that much smaller.)

Prepare the dough with all the ingredients except the butter and sugar.
Let it rise 30 minutes
Work the dough little by little adding the butter.
Add the sugar
Make little balls about 100 g each
Let them rise 15 minutes
Cook them about 3 minutes in a 4 by 7 waffle iron.


So, next time you take a bag of cheerios to church to keep you kids happy, think of us in Belgium where the kids carry waffles instead of cereal. (And I'm not kidding either!)

This message isn't actually about the blog, but rather about Kevin's biography. I was wondering how he was born in a log cabin he helped his dad to build. That is, how did he build it before he was born? :P

Have a little faith Stubby! Hehe. I think you're the first one to make a comment about that in the year I've had the biography out in the world of cyper space. Good eye, good eye.

I might have to use that recipe somepoint when I have a waffle iron...
But check out my blog at somepoint at: http://mdinnes.greatestjournal.com

Can you believe that we were in Brussels and never tried the waffles?
We bought lace and chocolate instead.

In order to "save" the last of our sugar pearls, we haven't made these waffles too much. For the most recent attempt, we tried using dry yeast (a 1oz cake of fresh yeast = 1 pkg active dry yeast, or 2Â¼ tsp; so 100g fresh ~= 8 tsp active dry), and that worked pretty well. I'd really have to do more experimentation to see if I like it with less/more yeast.

In short of tracking down the "waffle brotherhood" and stealing their recipe, this has been a decent substitute. If anyone has any suggestions on how to make this better, or a better recipe altogether, please share.

Looking for that Sugar? Search for "Hail Sugar (Pearl Sugar)" ChefShop.com has it.

Also, if you live in Philly:
http://www.bontewaffles.com/

that sugar from chefshop.com is not the right one. It's too small for traditional Gaufre de liege.

They are also supposed to melt on the outside and caramelize the waffle.

Sucre Perle is almost impossible to find in the US.

Kevin, you mentioned using a bit less yeast in the Gauffre de Liege, even 75g of yeast = 6tsp dry.
We have looked at other Receipes and they use 1/3rd amount of dry yeast in comparison to yours. Why so much??

I've only looked at a handful of recipes, but they all have about the same ratio of flour to yeast. For example, the recipe on the sugar pearl box calls for 750g of flour and 70g of fresh yeast, so that's only a little less than my recipe. In fact, we like that ratio a little more. Perhaps the recipes you've looked at have less flour than ours?

So for someone that wanted to make Liege waffles that tasted exactly like the ones that the street vendors made, how would I go about purchasing the frozen ready made dough if I lived in California? I want to be able to compare the taste from the ready made dough so that I could try to emulate the taste as much as possible. Thank you in advance.

I do not know of anywhere that sells the ready-made dough on this side of the world. If you find a place, please let me know.

I make my own sucre perle buy breaking cube surgar with a hammer. This works well on the Gauffres Belge Liegoises for the sugar to carmalize to the surface.

I've always thought about breaking cube sugar to make the sucre perle. I'm glad to hear that someone has tried it before.

I very much enjoyed having this dish. I had prepared it last week, turned really delicious. Thanks for sharing.

We love our Belgian Waffle Maker, and use it pretty much every weekend.

Crunch cube sugar does'nt work it melt completly and caramelized...
There is belgian pearl sugar is available on line imported from Belgium getawaff.com sells it by 1 Lb bags.
Or you can follow that link:
http://www.belgianpearlsugar.com