Blog: What were they thinking?

What were they thinking?

Some time ago, while at the Salt Lake Airport, I noticed a sign that was on many doors that led to apparently secure areas. Knowing that airports must be and are becoming more and more security aware, it came as no surprise that they put up a sign on these doors, warning the casual tourist or businessman not to go through the door. What surprised me, however, was the acronym they chose to give the warning. While this would not phase the majority of travelers, for one who speaks Spanish and who learned at French immersion school about the dangers of certain diseases, this was quite startling to me: 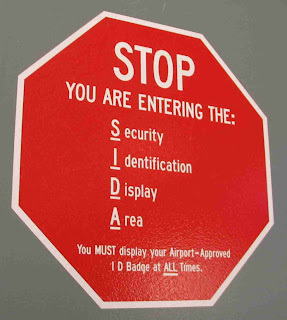 SIDA, in French, Spanish, Portuguese, and Romanian (according to Wikipedia), is the equivalent of the English acronym AIDS. Imagine being a tourist from Mozambique, seeing this sign and interpreting it as: "Stop! You are entering the area infected with AIDS." Who was in charge of designing this sign and why didn't they do their research?

Hmm, maybe that's why they do it. If I spoke French I'd certainly stay away from there...I smell a conspiracy.

Of course, it's the Salt Lake airport. Of course they didn't do a cultural background check on their acronyms! When are we going to see you guys?