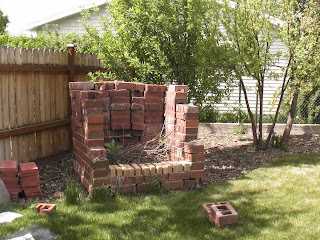 When we moved into our house, we found an old crumbling structure in the backyard, which might have been either a barbecue or a firepit. Or neither. It didn't really matter, because it didn't serve either purpose really well and it was falling apart. 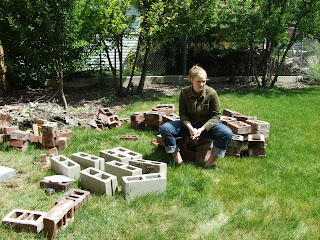 I decided that I would learn a little about bricklaying and build a brand new barbecue, using the same bricks. Demolishing a structure with the intent of reusing the building materials is a much more time-consuming process than I had expected. Add to that the discovery of numerous hornet nests (they might have been yellow-jackets) in the holes of the bricks, and you have yourself a whole weekend's work. I managed to salvage 120 full-sized bricks, in addition to many broken ones.

Armed with a couple library books and a few brick bbq plans I found on the internet, I designed the layout and made sure I had the supplies I needed:
If you're interested, here are the plans I designed: 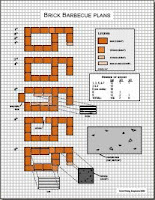 At first, I was just going to use a bunch of paving stones as a foundation, but, being unable to find any bigger than 16x16", it seemed more and more apparent that laying a concrete foundation would be both simpler and sturdier. (it also helped that my neighbor Chad had poured concrete before and was willing to help) We poured the 3'x6'x4" slab late one Friday evening and carved in our names.

It took a total of 20 hours over the course of a week and a half, but I finally got it all done. Here are some key steps to the construction, with a few comments: 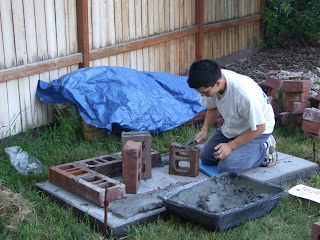 The mason's string was most helpful for the first course, which helped to keep the bricks lined up straight. For the remaining courses, I just used a level. 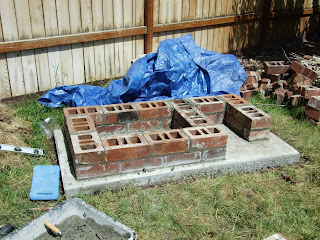 (it took over 3 hours to lay the first two courses - after that, I got faster) 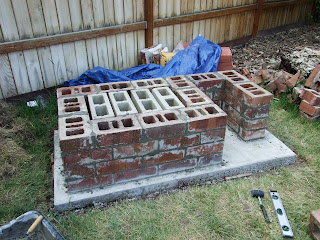 The middle was filled in with cinder blocks (which I happened to have laying around) and some miscellaneous pieces of brick, which was covered with fine wire mesh and a thin layer of mortar. 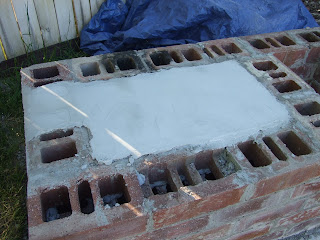 The hearth floor, with a section that will facilitate cleaning of ash & pieces of dropped food. 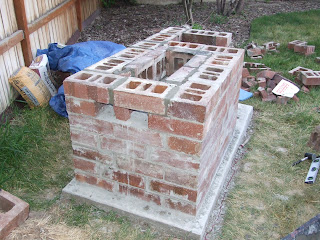 The first 7 courses, with 5 bricks on their sides for holding up the charcoal grate. 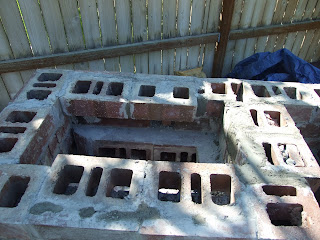 The final course, with displaced bricks for holding the cast iron grill and the porcelain tabletop. 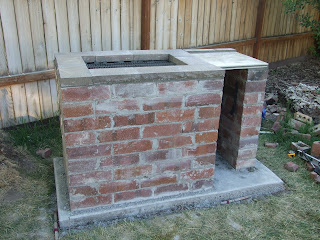 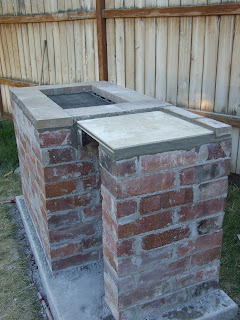 The right side of the grill not only provides a tabletop for placing dishes & food, but also a storage area for charcoal, bbq tools, and more. 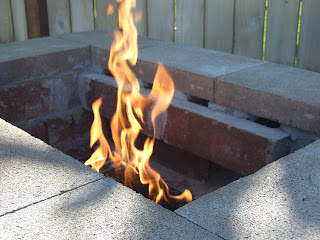 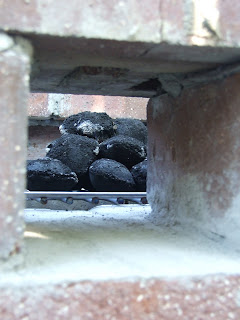 For those who just can't get enough of this thing, here's your chance at looking at it up close (besides actually coming and seeing it yourself). Be forewarned, the video's almost 5 min long:

So, it took a lot of time, but it was a worth it. I just wish there were a lid for this thing...

I loved the part at the end of the video where Alena approved.

Brilliant! It looks really professional! Alena will even more impressed when she tastes the lamb chops.. mmmm...

Wow! That was totally ambitious (spelling??) of you to sort through all those old bricks and make something new! Amazazing!!

I am SO impressed!! wow.

It was even more impressive in person. Thanks again for the food and good company!

Good gravy, what can't Kevin Wong do? Well done! My dad would be impressed with your handiness. Have you considered upgrading it to gas in the future? I'm sure you could rig up burners and send the hose out the cleaning hole. Also, you could always buy an old grill off of craig's list and salvage the lid... We will have to come bbq when we finally make it back out west.

that is amazing. i'm very impressed with your work. you could probably build your own lid with all the skills you've acquired. hope your first bbq went great and i'm still sorry i missed it.

I love a BBQ. Impressive.

I'm very impressed! That sounds like something Steve would do. Nice job, it looks very cool!