Alena and I went to the zoo last week with playgroup and it was just a bit disappointing. I'm not much of an animal person myself (not to mention...frugal), so I wouldn't have paid to go in myself, but I was willing to give it a shot so Alena could maybe like animals someday. Well, Alena certainly liked the zoo brochure. She sat in the stroller and looked at it for quite a while several times throughout the day. (That's our girl. It was free.) She didn't actually notice that there were any animals there though. One of the mothers was trying to help her daughter see the small frogs in the tanks, because her daughter likes frogs, while I couldn't get Alena to notice the zebras and elephants. She did enjoy looking at the other children there and eventually she started to see the animals in the small animals building. (I think because they were closer, and because she had just eaten and therefore was willing to play.) Last time we were at the zoo both Alena and I really enjoyed the bird show. Unfortunately after school starts, they don't do the bird show on weekdays. So, in the end, it was fun, but not $8 worth of fun. (I think she enjoyed herself more the last time I let her walk in the grocery store rather than sit in the cart, and that was free.)

This week we went to "Gardner Village," with playgroup, a small shopping center with a little creek with ducks, a petting zoo, pony rides, and at this time of year, witch statues. I wasn't keen on spending money for Alena to ignore animals again, but I was keen on talking to people other than the two people I normally come in contact with in a week (Kevin and Alena). Alena enjoyed looking at the other children there, and touching the pumpkins. 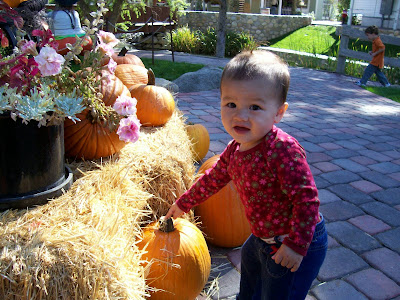 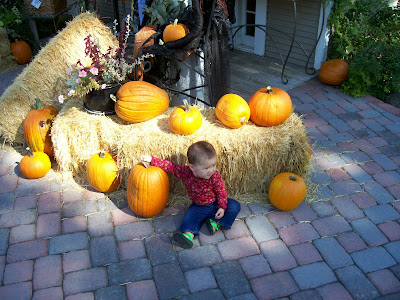 (Do you like those radioactive shoes? We get more comments on those shoes than you can imagine. Most of them the kind of comments where you say,"Wow! Nice shoes." but it really means "I can't believe you wore those!" But that's our frugal selves again. We got those shoes for free, and we only have one other pair of shoes that fit her, and they're for Sunday, not tromping through goat poop. They don't make many size 2 shoes that you can actually walk in. Only silly waste of money, but adorably cute infant shoes.)

Anyway, I decided to give the animals one more go. So I forked over the $2 dollars (I told you I was cheap) to go tromp through goat poop. Alena loved the part where she was walking around and not in a stroller, but she wasn't to happy about the goats and sheep taking up the whole sidewalk in places (the places with shade). Then she had to walk on the more rustic dirt and bark. She did enjoy looking at the baby piglets. They were behind a fence. She shook and shook their fence and yelled at them. She tried to touch a chicken's beak (the chicken wasn't too happy), but she would not touch the soft fur of the cute little baby goats (even I touched them and thought they were cute.) She liked waving to the animals though, especially those behind fences. In fact, there was a big pig named Sally who had her own pen. She was at the far end of it when Alena saw her. Alena went right up to the fence and waved and called to Sally. Sally must have liked her because she started lumbering toward us, grunting as she came. She put her nose right on Alena's hand on the fence. Alena crinkled her nose and started backing away, then begged for me to pick her up. So there you have it. Alena is her parents' daughter. At least she won't be begging us for a pet dog we will never allow her to have. 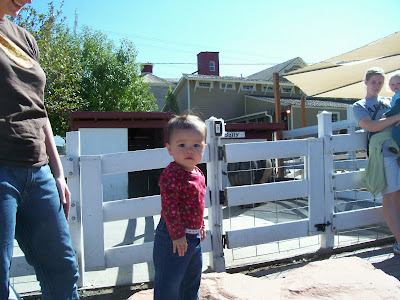 I like her shoes, they have character... and they look comfortable.

When you come to New York we can go to the Bronx Zoo on the pay-what-you-like day (suggested price 5 dollars). By then Alena will be way more interested in the zoo. Reuben wasn't at all interested until this year... and now he talks about it almost every day. so don't get your hopes up just yet.

I love it. :) And I really like her shirt... not in the "I can't believe you wore that" kind of way, but in the "It's adorable and really goes well with her coloring" kind of way.

So, little known fact about me. Gardner Village is actually named after my great-great grandfather.