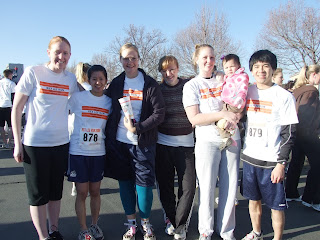 The before. Paul, unlike me, wanted to warm up. I wanted to save every last step
for the actual race. Who do you think runs for real?
I think I'm on my way to a running addiction. I'm not there yet. I could quit cold turkey right now no problem, but here's the thing. I don't think I will.

One of my new year's resolutions this year was to run a 5k. I decided last year that I would do one, and started training, oh, about two months ago. Courtlin and I had planned to do it together since last year, and Kevin got in on it when he peeked at my New Years resolution list and copied me. Jordan, Paul, Jolene, and Elise decided to join us, and perhaps most importantly, Noelle, who has access to a treadmill and was willing to trade babysitting to train decided to join in on the fun 7 months pregnant. (She ended up not being able to run because she had to coach the YW basketball team that day, but she still trained with me.) I started training with this program but doing 4 runs a week rather than 3. 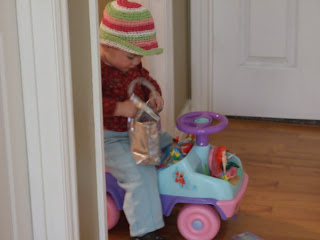 This is what Alena did while I tortured myself on the treadmill
I got to the part where I was supposed to run 2 miles without stopping to walk when I decided I HATED running slowly, which is the only way I could possible run 2 miles without stopping to walk, and discovered that I would arrive at the two miles faster if I ran fast, and then walked fast, and ran fast and walked fast. Plus also, I wouldn't despise it quite so much. That's when I switched to running faster rather than longer. Proof. I'm the one right in the center of the piture.
Well, I ran the darn thing last Saturday. I came in last of all those in our group (we didn't really stay in a group), but I ran the thing and it didn't even take me an hour. It only took me 34:48. That's only a little over 10 minutes longer than it took Kevin who ran twice to train. (I can only come to terms with this by reminding myself hundreds of times that his magically being fit without really trying is in the genes he gives to my children.) 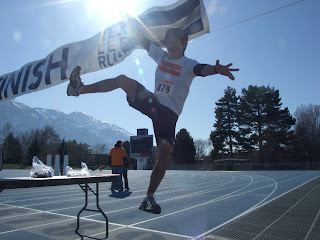 This is what Kevin does after running a 5k without really training. 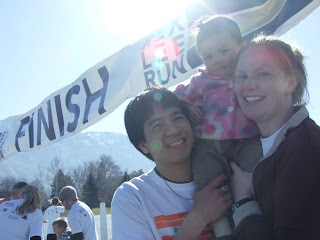 This is a child that will benefit from those genes.
Immediately following the race people started asking me if I liked it. The answer: Maybe you should ask me in a couple of hours. Truthfully, I only liked the last 1/10 of a mile, because I got to run as fast as I could, and I could see the place where I got to stop running. Forever. I had told myself that after I did the 5k, it was perfectly legitimate to decide to never run again. There are plenty of other exercises that I actually enjoy, so why continue running if I just continue hating it? In a couple of hours, I was rightfully busting with pride and feeling really good about having done it. I wasn't quite sure I was ever going to run again though. 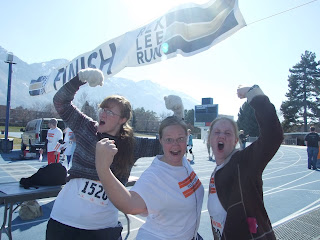 This is how I look when I know I never have to run again if I don't want.
And how 3 Reasor girls feel that they did something so very un-Reasor-girl-like.
I started asking around after the race, talking to people who like running. Does it hurt the whole time? What do you think about when you run? I've come to the conclusion that people who enjoy running can only do so because somehow they have learned to disconnect their mind from their body. What do they think about? Pretty much nothing. Maybe their breathing, maybe they have passing thoughts about...sorry...who they're passing, but mostly nothing. It's almost like meditation, only you burn a heck of a lot more calories. My thought process, on the other hand, goes more like this:

"Run. Run. Run. Keep Running. But it hurts. My lungs hurt. My lungs hurt, My lungs hurt a whole lot. Oh. My legs hurt too. My legs are hurting and my lungs are hurting and I don't like this. I really don't like this. Why am I doing this? I don't like it at all. In fact, I think I hate this. I'm just going to stop and walk for a while. No, keep running for a little while. No way, I hate this. But you can go farther. Sure I can, but I don't want to. I don't have any desire to. This stinks. Try listening to the music. Distract yourself. Right. Like I can listen to music when my lungs hurt like this, and my throat has that disgusting stuff stuck in there. I'm walking."

But this running induced state of meditation intrigues me. If I could figure out how to do that, I could like running. And running could relieve stress. Wow, wouldn't that be nice? And maybe, just maybe, I could take Alena in a stroller and go for a run when I needed to get away, rather than turn on a bunch of Reuben videos so that Alena will give me 20 minutes of peace. So I started researching. (Husty should be expecting a phone call. Every time I remember to call you, you're asleep, because you had the good sense to adopt your good wife's sleeping schedule.)

I found this article, and tried it out this morning. I ran two complete miles without stopping to walk, and then continued to run/walk for another half mile. So, I finally passed my stopping point on my previous training regimen, and I was right , it did take longer than run/walking 2 miles. However, I looked up at myself in the mirror (I'm still running on a treadmill) at 1.75 miles, and *gasp* I was smiling. Smiling I tell you. And it wasn't that grimacy smile that pops up as I say to myself, "12...more...steps...and...then...you...can...quit!" I was happy. In the process of running. And I wasn't even thinking about when I could quit. I doubt it was really "runner's high" as my sources tell me you have to go farther than 2 miles to get something like that, but I smiled. This is progress. I think I'll go do it again tomorrow.

Way to go! If you ever need a treadmill to run on, we have one too. But I can't promise that Dax won't try hitting Alena again.

Cool! How awesome that you did it!

Just so you know, I read this.

kev, that's quite the hair do you got! you're like a chinese john lennon or something.

I completely agree with the Chinese John Lennon comment. Hilarious! I also would like to say that I'm outrageously jealous of all the sun-shiny pictures! Portland's been having a temper tantrum for the past week. Blah. Anyway, I just wanted to say that if you are really serious about learning how to enjoy running (since, despite what some people think, it's something that does need to be learned) I can tell you how I became a part of the runner's freak club. And, if you're interested on the whole "what-do-you-do-with-your-mind-when-your-body's-freaking-out" thing, I'd recommend reading a book called, "Once a Runner" by John L. Parker. I haven't actually read it myself but I've heard nothing but raving reviews of it and I believe it deals a lot with the mind struggle. Also, I'd highly, highly, highly recommend going to a running store that studies the way your legs and feet turn when you run. It's obviously more pricey than pulling some shoe off a Target shelf but you'll be perfectly matched with what you need. Many people don't realize how your shoe can majorly effect how your body, and your mind, react when you run--not to mention it plays a big part in preventing injury. Also, cross-training is very important--I'm working on a personal program for myself that's called Crossfit Blitz; and one of the major components of it is training in 30 minutes or less every day so that it can be realistically followed. Okay, I've blabbed on enough but, like I said, if you're interested, I've got a few things I've learned from experience and from observation. Lastly, WAY TO GO!!! The finish line is always worth it! (And next time, consider having your hair made up in tiny little braids; it's a psychological thing that makes me think I'm a Kenyon and am invincible during the race--plus, it looks really cool in pictures :-D)

Way to go!!! I am proud of you! Especially for running on a treadmill; oh I hate those things. I am anxious to know if you are going to run another race this summer? Part of me wishes I wasn't pregnant right now because I am feeling a HUGE desire to run, which I haven't felt at all since having Ivy. I really don't care for running but after completing a run I feel INCREDIBLE! When I was really running, I'd run 4-5x a week, making one day be a slow, yet really long run day. One day would be hills, and one day would be sprints. The last day or two would be a 3 mile casual run. But seriously doing those first 3 weeks weekly totally changes your body and your running, it cuts time! It's just too bad I haven't done that routine for 2 1/2 years now! But next summer is for me and I am going back.