One of the things that sold us on the house was the yard. Being on a cul-de-sac, we have a relatively narrow front yard, but the back yard is nice and spacious. It is well-landscaped and features a wide range of plants & trees. But it's the maintenance that kills me. I don't have much experience working in the yard, nor do I particularly like doing such menial tasks as weeding, pruning, and picking up branches & leaves. And then there was watering the lawn. All we had was a small sprinkler, connected to a garden hose, that covered a 8'x10' area. Given the desert climate we live in and the size of our yard, we have to water pretty often. It went something like this:
You get the idea.
Unlike the places where we grew up, residential sprinkler systems are fairly common around here. During the summer, if you don't water, the grass gets brown pretty quick. We knew that installing a sprinkler system would not only help us out in keeping the yard looking nice, but it would increase the value of our house.
I actually had planned on installing it last November, but it was delayed by various things. I spent a lot of time reading up on the subject and then designing the system. It turned out that most of the major irrigation manufacturers offer free design services - all you have to do is submit an accurate plan of your yard. I did this, but as I learned more about sprinkler design, I realized that the plan I had received wasn't going to really work. So I redesigned it, bought the parts, and got to work.
As with everything else I undertake, it took a lot longer than I had hoped. A couple of my friends came to help me dig the trenches. I'm definitely glad I rented a trencher, because without it, it would've taken a lot longer. The only problem is that it took some time to figure out how to use it properly (the guy at Home Depot didn't tell us it was supposed to go backwards, not forwards!), and because of that, there were a number of uneven spots and trenches that weren't deep enough. Also, there are spots where you just can't use the trencher - you have to dig by hand (a pick ax is the way to go). 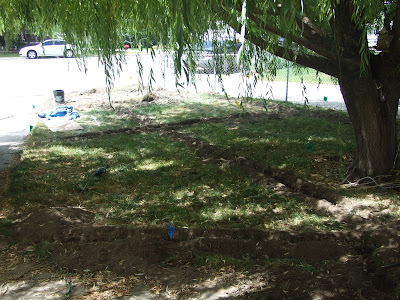 One week later, I was ready to lay the pipe, install the manifolds, run wire from the timer in the garage to the valves, and install the sprinkler heads. I had learned enough from my reading and from other people that I basically knew what I had to do - it just took a long time.
A huge problem arose when I first tried to turn on the water where it teed off of the water main. I could turn the valve, but no water came through - it turned out that the valve handle had broken off! On the third time I'd ever used it! A friend helped me dig the 5' deep hole again to the stop & waste, and then I could replace it with a more heavy duty one. Lesson learned: when it comes to specialized components, go for the heavy duty ones that you get at the specialty store, in this case, the sprinkler supply store. The one you can get at Home Depot just doesn't cut it. 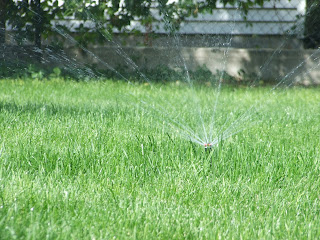 My final obstacle was to restore the grass. When it takes so long to finish a sprinkler system, problems compound. Not only does it put the yard out of commission, but the longer the grass is dug up and covered by dirt, the worse the grass gets. I ended up planting some grass seed where the trenches and holes were, and it's coming up nicely.
Now the grass is nice and green. Since I programmed it to run early in the morning, it's done watering long before we wake up. No more dragging the hose around the yard, and no more kitchen timers. 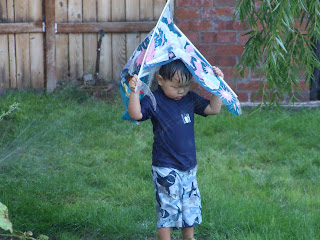 Andersen using a kite as an umbrella...
So, here are my lessons learned:

Good job! Funny how things always could have made your life so much easier if you'd known those lessons learned beforehand!

Hot dang, I'm impressed. Hearing you had to redig the stop and waste might be saddest thing I have ever heard. Well done, though. You truly are a renaissance man.

I can't tell you how much I feared the worst when the water wouldn't turn on. When my friend sucked up the handle with the shop vac, he simply started digging, and suggested that he dig it all while I continued to glue the pipe. He saved me from going insane, because I did not want to dig that hole again.