The following post is disorganized and scatterbrained. It's all a part of the "Being Reasor's Mother" theme.
I was downstairs during nap time (Reasor has had a nap relapse. Hallelujah!) doing some research on schools for Alena next year. The dehumidifier was going full blast in its attempt to dry out the carpet after our flooding incidents so I didn't hear Reasor wake, climb out of his room, and go hunting for a snack. Reasor is always hunting for a snack. The child eats like no one else. For example the other day he had an orange and a half, a handful of strawberries, two bowls of bran cereal, and some 100% whole wheat bread with jam for breakfast. (I'm not trying to prove I'm healthy by mentioning the whole wheat and bran, just trying to prove that the foods he was eating should have had some staying power.) About an hour later, while we were out, he convinced the 8 year old girl he and Alena were playing with to give him a banana and a half. Then he came to me looking for crackers. And now you know why I'm searching for high protein snacks so he'll stay full semi-satisfied for more than 10 minutes. What is the hypo-allergenic alternative to string cheese? Or spreading peanut butter all over your breakfast? When your child doesn't eat almond butter. Or almonds. Or vegetables. Reasor, It's not fair being picky and allergic. You're just going to have to pick one.
Anyway, I eventually made my way upstairs and discovered Reasor sitting at the kid sized table covered in chocolate. He was holding a cup of chocolate syrup, which he informed me was chocolate milk. The nutritionist in me has been uninvolved in my conscious and unconscious thought since my third trimester began, so the maid in me (which is fully involved in almost all of my thoughts) was delighted that he had removed any type of milk from the recipe, as that would most likely mean a quart of almond milk on the hardwood. In addition to the chocolate, scattered across the floor there were: the peel from one clementine, two unpeeled clementines, the remains of an unwashed unpeeled carrot (I assume the rest was eaten), another 2 pounds of carrots, a head of lettuce, 2 opened bags of pecans, and 1/4 of a green pepper (the rest had been used in meals earlier this week).
After the bath/clean-up, Reasor in his sweetest voice asked whether we could cuddle on the rocking chair and read a story. That sweet moment lasted an extraordinary 10 minutes before he wanted to eat again. 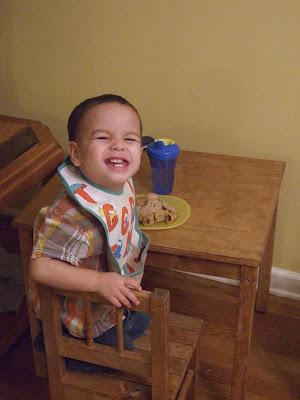 "That's not a child; it's a remorseless eating machine!"

All I can say is he must be growing...

Simon is a little human vacuum as well. However, I'm having a really hard time trying to think of how I might keep him fed without cheese or peanut butter, since those are, hands down, his two favorite things. I'm not coming up with anything.....

He loves oatmeal--just plain old cooked oats with some unsweetened applesauce mixed in. Oatmeal is supposed to keep you full, right?

I've been making my own pesto that's almost all spinach, with just a little basil mixed in. My kids will eat whole-wheat pasta with pesto on it until the cows come home, plus, they don't even know they're eating vegetables. You'd have to skip/replace the parmesan. I use very little. You could probably get away with skipping it if you just added a little salt.

And there are always eggs or potatoes. Both of my boys love fried eggs, which surprised me because I always thought only adults liked them. (Can Reasor eat eggs?) And I have Asher convinced that cubed red potatoes tossed with olive oil and spices and then roasted are like french fries.

Yikes! Sounds like a lot of food. Hang in there, Talyn. As far as easy high protien snacks go, Margo loves beans (as in open a can of chickpeas, rinse and serve) as well as plain cold, tofu. If Reasor didn't like plain tofu you could fry it to get extra fancy. Eggs are also a good suggestion.

Unfortunately eggs are Reasor's third allergy. Alena used to love canned beans. It's about time I tried them out on R again. Reasor is not much of a potato guy, but I did just stock up on oats when he ate two bowls for.breakfast the other day.

Steel cut oats, sunbutter, tofu marinated in grape juice (it turns purple!), homemade granola bars with hidden veggies mixed in, sauteed butternut squash (salt & olive oil, who could complain?). I used to make homemade blueberry muffins almost every morning because Zella would eat 6 of them after her 4 scrambled eggs. I hear scrambled tofu is tasty, but we're not going there.

Grape juice tofu! I'm almost certain I can convince this child to eat that!