The probability of it happening wasn't very high and neither Talyn nor I particularly wanted a baby on leap day - but it still happened. Barely. It was 11:00pm in the hospital when Talyn mentioned that she hadn't even had the urge to push. She had pushed for 30 minutes for both Alena & Reasor, so there was a good chance that Elsie was going to be born after midnight. Not 5 minutes later and after a full minute of pushing, our third child came into the world. Don't worry, I'm not going to give any more details about the birth. That's Talyn's story.

Now we're officially outnumbered. I don't have a very good idea what it's like yet, since Talyn's parents are here for a week to help out, but I'm optimistic. Alena & Reasor love having a baby sister. They're excited when she opens her eyes, show concern when she's crying, and give her lots of hugs and kisses. 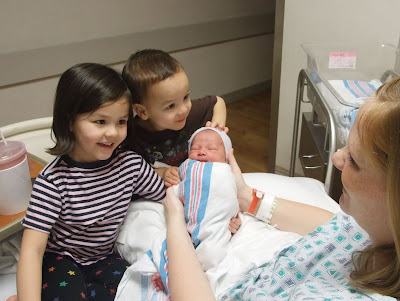 Visiting Mommy & Elsie at the hospital

This first video is a little soft, but if you listen carefully, you'll hear Alena talking to Elsie and Reasor repeating every word.

Reasor started calling himself "Baby Reasor" a couple months ago, and we were afraid that he would be jealous of a new baby in the house. Of course, it's only been a few days, but it seems like he loves having a baby sister. Here, he's showing us that he can be a good big brother by reading her a story and giving her a "good night, sleep tight" hug.

When Reasor was born, Alena took the change in stride, like she does with most things. But for the past few months, Alena has been very excited and always said that she wanted a baby sister. "A baby girl was my choice," she told me after I broke the news that it was a girl. 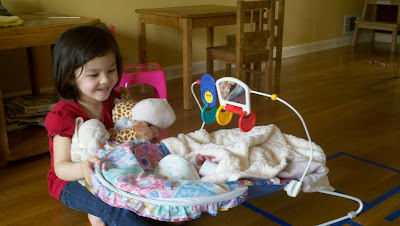 Alena showing Elsie all of the new baby toys

Though having a baby at anytime is no small undertaking, I've found that this time has affected me the least. I found myself less anxious about the pregnancy and less changed by the birth. Maybe it's because so much of my time and energy is spent with Alena & Reasor, or maybe it's because we're getting more and more used to having a family.

YAAAAAAAAY! So cute. You almost make me want another one. ALMOST.

Hooray for babies and especially on leap day. Can't wait for the birth story!

Congrats!!! Three isn't such a big deal (I think). Your kids are beautiful. You guys are so great!!

Congratulations! And hooray for Alena getting to have a sister, just like she always wanted.

Congratulations! You're actually my second friend that had a baby on Leap Day this year! Your family sounds just perfect and I'm so happy for you!