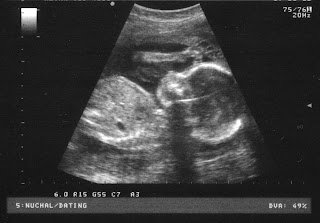 Sorry to get your hopes up, but no, that that announcement. It is, however, something I might share during a good news minute if I still got to go to Relief Society.

The announcement is that on Thursday night, for the very first time in my entire life, I dove for a ball. That's right. Five years ago I would have looked at the ball going out of the court and decided it wasn't worth it. (I would have most likely been looking from my couch.) Heck, two years ago playing with my kids at recess I probably wouldn't have even run for it, but today I'm gloating over the beautiful bruise on my right knee. Now, before you have unrealistic beliefs about my basketball abilities, I was WAY off. I got the ball all right, but about 6 feet too late. I did, however crash into the chairs where spectators would have been sitting, had there been more than 6 spectators. It felt fabulous! I may miss passes and shots, but ain't nobody gonna accuse me of being lazy on the court. (It's fun that you can write "ain't nobody" on a blog, without worrying your grammar grade will suffer.) 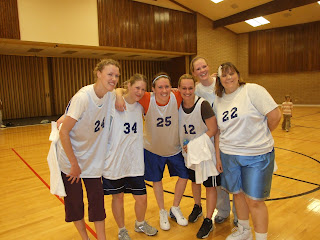 There's the team
Despite my inability to get that ball before it went out, my team won the game. By the skin of our teeth, but a win nonetheless. That win put us into the championship game, held this morning. The game was against the team I've only ever heard called "Tracy's team." They've been together for, as far as I can tell, forever. They know the game, and they've got mad skills. We played them earlier this season and lost by quite a bit. But, man, are those girls fun to play with! And here comes the next announcement: I fouled a girl, and they called it, and it was a good foul. I stuck my hand out, and she crashed right into it with her neck. That was the very first time I have had a foul called against me in my whole entire life. It felt good! I never knew fouling somebody could feel good. It didn't feel good because I smacked a girl in the neck, it felt good because I was really playing. I was fully invested in the game. (Don't worry, she didn't even cry.) 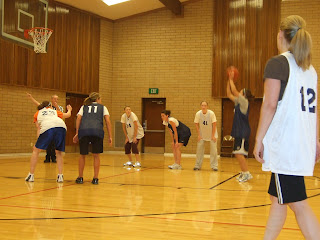 There she is not crying.
I was so invested in the game that later, I dove for another loose ball . . . and got it! I ended up on the floor with the ball, and I safely passed it to . . . someone on my team! It almost made up for when the tip off went to me and I clumsily shoved it off the court. :) I'm not the star player yet, (haha, "yet" implies that someday I will be. I'll just leave that.) but I've made major improvements. 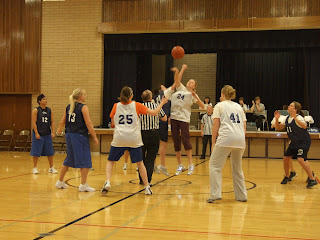 There's the tip off I shoved off the court.
Goodness, run a 5k last Saturday, play the championship basketball game today. Someone who didn't know better might accidentally confuse me for an athlete. 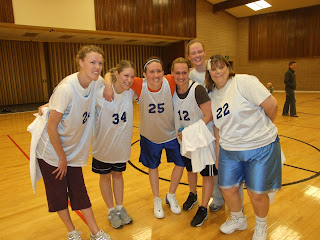 As proof that I really was fully invested: in this picture, my eyes are closed not just due to a blink, but because sweat actually dripped into my eyes.

that was a mean joke. i was super excited and then turned around and got kicked in the face.

Way to be athletic! The joke was a little mean, but I think that your post was entertaining enough to make up for it. Plus, the people who always think everything is a subtle form of "that announcement" are totally asking for something.

You are turning into a super athlete. Yeah for diving for the ball.

Way to go! I wish I could have been there! I do feel a little cheated with that ultrasound photo prefacing your blog!

So congrats on the athletic ventures, although I think I feel slightly mocked with the joke at the beginning.... I think that's what we uncreative folks get. :) Hope all is well!