Honking Car Horns and Other Phenomena 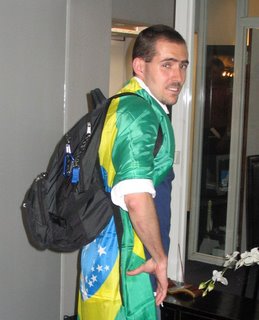 Raise your hand if you're in the United States. OK, now keep your hand raised if you've been following the World Cup. Just as I suspected... Now, put you're hand down if you were NOT born in the US. A-hah! I knew it. That leaves, what...3? All right, put your hand down if you played soccer in high school or served your mission in Brazil. As we see, only one hand is still raised. That's what I try to tell people here. For unidentified reasons, Americans think that baseball is more exciting than soccer, leaving soccer only above cricket and curling. Not so in Europe, as I'm sure all of you already knew, but I'm going to write a blog entry about it anyway...

The World Cup is big here. You don't have to follow it to know who's winning their games. You can tell by which flags are blowing out of the open windows of the cars driving around honking. For instance, while we were in LiÃ¨ge, we watched the first part of a game and then went to dinner so we could get home before it was too terribly late. We knew when they scored because of the cheers coming from around the city as we ate, and we knew when Ghana won, thanks to the cars (maybe just one really loud car?) that kept going around honking. In fact, when we got back to Brussels 3 hours later, I was sure the Italians had won the next game, but it was still the Ghanaians honking. (As it turned out, Italy had very little to celebrate, tying with the US after scoring two goals, one for them and the other for us. Although I didn't see the game, our Brazilian friend Eduardo told us that the US actually played really well and the Italians weren't so good. The US kept it tied while playing almost the entire second half short-handed.)

Which leads me to my next point. For some reason it is entirely acceptable for people to tell me that my team stinks. Before the World Cup even started, a girl told me that even though we think we're the best at everything, we're not going to win the World Cup. I assured her that we knew we weren't going to win. It's pretty obvious, even to us, that the other guys are better at soccer than we are. That's why you can't even find World Cup on US television, unless you have satellite or go to the Spanish channel. She was certain that I was the only one who knew we weren't the best soccer team in the world. Come to think of it, I think there're quite a few Americans who never even heard that the US women were the best team once. Since then a couple of other people have come to gloat that the US played a pretty lame first game and had their goal scored by the other team in their second. (No one told me that also happened for England). Actually, I've pretty much been voting for Brazil, Ghana, and Argentina the whole time anyway.

As it turns out, I'm having a lovely time following the World Cup for the first time. It's actually pretty exciting at times, especially since most of the games that I see I watch sitting next to a Brazilian who knows what's going on. (If you want to know what's going on, find a Brazilian. They know. Men, women, maybe even four year old children (though I haven't seen one) from Brazil all scream strategies and plays at the television. Ask them how they feel about Ronaldo too.) So, if you have a few minutes, give it a shot. (Pst! They have really short soccer games that are made of only important plays called "highlights" here. ; )

When we were WA Philip Waters and Steven Raab were wearing their Brazilian Jerseys and watching the World Soccer cup. They both went on missions to countries that care about soccer.
LWR

I like how you're incognito mom, but you give the full names of those other guys :)

I was not sure that you would know them by Philip and Steven.
mom

go france!
I have not really watched it (always busy) but have kept up with it enought to know about it... that's what happens when you were in China for the start of it (or Anywhere other then America/Canada)