Blog: The Secret Behind King's Cross

The Secret Behind King's Cross

We recently had the opportunity of going to London for a four day visit. One great thing about living in Brussels is that we are close to many European cities - Amsterdam, Paris, and London are all within 3 hours by train. London is literally a hop, skip, & a jump away. Having spent two of our days trying to get the most of our London Pass (it's definitely worth it, but only if you're okay with little relax time), we still had two more days to soak in the London air. For those who are interested, the London Pass entitles the user to visit any of the 50+ sites of London that sponsors the pass, sometimes even getting past the lines at the ticket office. I know that sunk costs are irrelevant (anyone who has taken Econ 110 from Kearl at BYU definitely knows what I'm talking about), but it's both human nature and engrained in my character to squeeze every last drop from the pass - I relentlessly planned our days to the hour and let the pass work for me. Heck, why else would we have gone to the Queen Ice Rink & Bowl to skate in circles with a bunch of teenagers? But don't get me wrong, it was very refreshing to have the cool air blow in our faces after a long and sticky day... 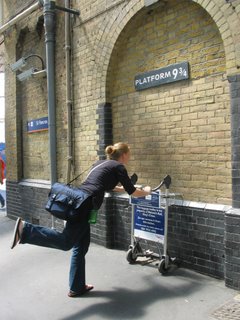 Alright, I guess I should get to the point of my little post here: "The Secret Behind King's Cross." Any J.K. Rowling fan could tell you that King's Cross is the train station in London where Hogwarts students board the Hogwarts Express to go to Hogwarts School. (isn't Hogwarts a funny name?) Being Harry Potter fans ourselves, we decided to visit this station during some of the free time we had before returning to Belgium. We were just wanting to see the station, locate platforms 9 & 10, and maybe take a picture where the Â¾ mark might be. As we approached these platforms, though, we were surprised to see a sign indicating "Platform 9Â¾". We felt a surge of magical curiousity, and Talyn even managed to push half of a luggage trolley through the brick wall! But we couldn't push it farther in, and it was impossible to pull back out. Oh well. I'm sure some kids will have fun with it later.