My life has changed drastically over the last four weeks (new baby, [and with that, a new body] new house, big sister moves far away, new ward, etc.), and when that happens I find myself searching frantically for "normal". I often turn to the scriptures to make me feel at home, call my parents on the phone, eat comfort foods, etc. This time, I did all of that, but additionally I stumbled into that "home" in a place I never would have expected.

I don't like shopping. I never have. It's probably because I'm not willing to spend money, so what fun is that? I especially don't enjoy shopping with people who really like shopping, and thus spend hours doing so. I'm the kind that would just as soon buy the first thing that fits my budget and body and get out of there. But my dislike for the sport of shopping isn't limited to clothes and shoes. I also don't enjoy grocery shopping, which I think is a more common find in a female, but I might have a better reason.

You see, I spent 18 months being in charge of ward dinners at the FLSR. For you non-FLSR-ites, that means I was responsible to provide dinner for 150 people once a month. I had to get the ethnic recipes from natives, create a shopping list, buy groceries, and oversee the cooking of the food. Then I was the one to receive the complaints of people who didn't like it, or who were upset that it was late (OK, I also got to hear the compliments of kind souls who appreciated the work that went into it), and then make sure everything got cleaned up and the dishes got returned to their rightful homes. Believe it or not, I learned to like it by the end, and I can now see the many things I learned from it.

For instance: I learned the location of every unusual ingredient imaginable at the Macey's store in Provo. I began to consider myself a professional speed grocery shopper, filling two or three carts with enough food for 150. If I chose the right people to help me I could be in and out in 45 minutes. I know that might not seem fast, but I was buying more than $300 worth of groceries people! (As a comparison, once I made a poor decision and accidentally took people who apparently enjoyed spending insane hours in a grocery store, and it took 3 and a half hours.) Anyway, my speed and ease of finding things at Macey's became a secret pride of mine. I felt like I owned the place. In fact, I think I started to enjoy my trips there just because it was fun for me to beat my record times.

Kevin and I went grocery shopping the other day at the Macey's here. I hadn't been to a Macey's in over a year because there wasn't one close to our apartment. Well let me tell you, the one up here is exactly like the one in Provo. It was incredible, and as I walked through it picking up the things on my list, I had a strange feeling. I felt like I had come home. Everything was familiar. It was wonderful! I could have told you exactly where to go to get the cheese we used for the Spanish house dinner that time, where to find the cheapest tofu, and those herbs we used for the Arabic house's meatballs. (Goodness, I wish I had kept that meatball recipe! Bashar, where are you?!)

So now I know where to go when I'm feeling like my life has been turned upside down: My friendly neighborhood grocer. I love you, Macey's! 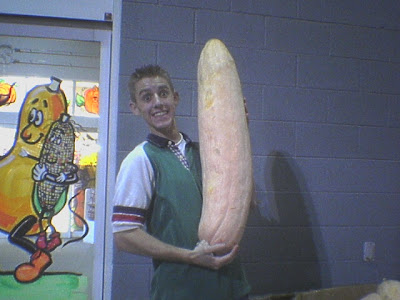 Here's a random picture I found when I was looking for pictures of ward dinners. Who wouldn't love Macey's after seeing that banana squash?!
P.S. Don't worry, we'll have new photos and video of Alena as soon as the Comcast guys actually provide us with HIGH SPEED internet.

There's something about you Wong's and pricing and shopping for items that make you guys happy.

Haha. Nice pic. Somehow hearing about you and Kevin's aversion to spending money makes me feel like I'm at home...