Heaven in my Bathroom

Think back to about 8 years ago. Do you remember the Herbal Essences commercials? You know the "Yess! Yeees!" ones? The ones you would see the occasional naive girl like me quoting without realizing what it was about. Perhaps there was a reason other than naivety that it never crossed my mind that it might be inappropriate. You see, I really feel that way about showers. As far as I'm concerned there are few things better than a long hot one in a pristinely clean shower. I just think about the sparkling handles, the shining shower head, the smooth walls, the sparkling white floor and the hot steamy water....Yes!

I love clean showers so much that I even enjoy cleaning showers. I like it now more than ever. You see, there has always been something holding me back from my clean shower potential. Back at home the girls gave me, as Wally Cleaver says, "the business" for being mom's special helper. Plus, two of my sisters always left hair on the walls. They were trying to keep it from going down the drain, but they rarely remembered to move it to the trash at the end of the shower. At the FLSR it was hard to get excited about cleaning the shower when I knew I'd only get one clean shower before 5 other girls got it dirty again. Next came the shower in Fiji, which had no curtain. Not to mention the shower head being at shoulder level. You had to clean the whole room to clean the shower there, and then I couldn't even enjoy the shower, being as I had to squat the whole time. In Kevin's and my first apartment I cleaned reasonably often, but the drain was a bit slow so it was never long enough before the floor was dirty. In Belgium we had a shower so horrible that I can't bear to describe it. In our last apartment someone had made repairs by putting clear caulking over the mildew, causing it to be permanently dirty, not to mention the orange stuff that grew between the tiles. (I doubt Kevin even noticed it. It was pretty subtle, but it certainly wasn't a rare occurrence for me to be scrubbing the grout with a toothbrush during my showers.)

When we moved in here, the shower didn't drain very well. After a week or so it didn't drain at all. Ok, it drained, but it would take 10 minutes to drain after Kevin's speed demon showers. I tried everything I knew (which is quite a bit being as I'm a shower snob) to no avail. Luckily my dreamy hubby and the next door neighbor came to the rescue. They replaced the pipes down there and voila! (or as some say back on the iron range, voy-la!), a shower that drains like a dream.

I cleaned it the other day while Alena was napping. Heaven! I'm in heaven! A draining shower that only two people use stays clean for quite a while. Many times all I have to do is take Windex to the handles and I'm in ecstasy. Have you ever experienced the joy that comes from a clean shower?

Perhaps some of you are thinking, "I've used Talyn's shower. It wasn't that clean." You're probably right. That's because I always reserve the right to the first shower when I clean it (And if it's not draining well, that means the only clean shower). I don't think even Kevin has ever showered in a freshly Talyn-cleaned shower. However, next time you're here, if you ask me to, I'll Windex the handles for ya and you can get most of the experience.

Alena has discovered a fun new game. Watch how good she is...

It's not her best work, but it's what I could get on tape. Watch her eyebrows.

A number of you suggested that I wake the baby. This is what happened when I did so.

A little change in my morning routine

Remember when I was doing my hair and makeup during labor? Haha. Good times. I did my hair and makeup again today. Are you impressed? I think it was more of a feat today than it was during labor. I'm not sure I have done both hair and makeup in one day since I left the hospital, and let's face it, I only did it there because I didn't have to get dressed too. So, for the last month I haven't looked so hot. Sometimes I look in the mirror and wish I could have my baby and still look pregnant.

I liked being pregnant for many reasons, one of them being that pregnant women are automatically cute. It's like nature's compensation for feeling big: you look dang good while you're doing it. Plus, at least for me, my hair was thicker, my skin was clear, and my wardrobe was all new. New mothers are not automatically cute. We just have to hide behind our automatically cute babies. (Which is fun, but not the same.) New mom's have a belly, but it's not the fun kind anymore. They have dark circles under their eyes and spit-up in their hair. If you're lucky, the new mother found time to shower at least once this week.

Some things you just don't understand until you've been there. For instance, have you non-mothers out there ever thought that taking a shower is difficult? Do you consider finding a clean shirt that fits an accomplishment? (I have plenty of clean shirts that don't fit.) Have you ever cheered when the laundry came out and there were no poop stains left? Have you ever spent so much time changing your baby's clothes every time they get dirty that you don't realize you're still in your PJ's until 15 minutes before your husband gets home from work?

Well, today I did both my hair and my makeup. I also got dressed, and did it all before 11:30. I guess what I'm trying to say is that y'all better come see me today, because who knows when this will happen again. But you better hurry before I have spit-up on my shirt . . . or maybe even in my hair and on my makeup. Then again, if that happens, you can still count on my baby being cute. I'll just hide behind her. 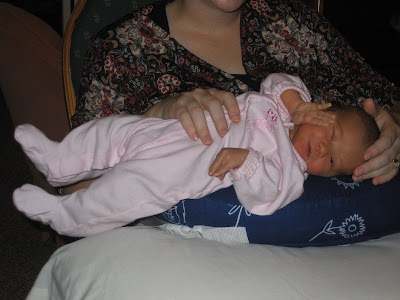 Pay no attention to the woman behind the cute baby
A note to single boys: If you DO consider finding a clean shirt an accomplishment, perhaps that's the reason you're single. :)