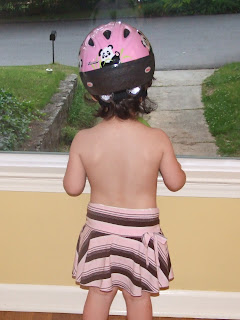 This is the outfit Alena chose to dance and "play soccer ball." Then she stood in front of the window and asked me if I'd take a picture of her looking out the window. 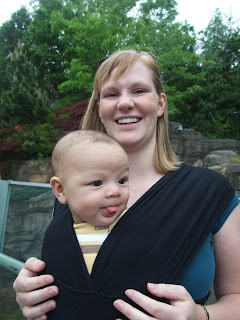 Reasors
From my birth, I was part of an elite group of people known as "The Reasor Girls." There were very few people before my moving out of my parents house who knew me separately from my identity as a Reasor Girl, and generally it was only a matter of time before they identified me with that name. Even after moving out, the term "Reasor Girl" was an integral part of how I defined myself.

A Reasor girl is someone who always goes to branch choir. A Reasor girl is someone who is at church early and late. A Reasor girl is someone who laughed too loud in high school choir and band and drama. A Reasor girl hides in the back of the Strege's van hoping to hitch a ride to their house to play (OK, not anymore). We are Mormon, and decidedly so. Reasor girls get together every Christmas Eve to grouch about having to pick a song to sing to the neighbors, and upon moving out, realize that Christmas isn't Christmas without caroling with your sisters. As Courtlin said in my wedding toast, we are so nice that the only thing we can think to argue about is which way to pass things around the table. We all cry at least once a year when we can't find our Easter basket. (I personally also cried every fast Sunday. Not because I was spiritual, just because I was hungry.) Being a Reasor girl means you let your little sister teach you how to do things you're afraid to do. Being a Reasor girl is a big responsibility, but also a great honor.
Since my marriage, even though Reasor is still part of my legal name, people I meet never know that part of my identity. It's still a big part of who I consider myself to be, and from time to time it makes my heart ache to think that people don't think of me as a Reasor Girl. It wasn't easy to give up my name and become a Wong. Don't get me wrong, I am happy to have added to my identity, and I wholeheartedly consider myself a part of the Wong clan now, but giving up the Reasor Girl identity is one of the biggest sacrifices I have ever made. I don't regret it, I just wish there were some other way (that I liked). I wanted to show my husband that I loved him by taking his name and I didn't want to pass on some way-too-long last name. Plus my mom would tell me I was confusing family history by doing that. I could write another entire post about how giving up my Reasor Girl identity has helped me understand what it really means to take upon you the name of Christ, but I don't really think this is the forum for that sort of thing. Suffice it to say I gave up a piece of myself in order to become one with Kevin.
Anyway, as soon as we learned a little boy would be joining our family, I started working to convince Kevin that Reasor would be a good name for him. It wasn't easy and took a while. In fact, as I recall, the day Kevin told me we could name our boy Reasor was the day he told me we were moving to Atlanta. (Kevin told me later that he sort of always knew that he would let me name him Reasor. I guess he just wanted to keep me on my toes.) There were some less than enthusiastic responses from people close to us, but those people weren't me, and they certainly weren't my mom or my cousin Liz. I will admit that it took a week or so for Reasor to grow into his name in my mind, but he's Reasor all the way now.
When Reasor was a couple of weeks old Kevin asked me if it was weird that my son's first name was my last name. The question sort of surprised me...No, that's not it. It was my answer that surprised me. I told him it wasn't weird because Reasor isn't my last name. Wong is my last name. It surprised me because I hadn't realized that I had assimilated so well. Maybe I needed to pass the name on before I could really let go of it, or maybe I needed to pass the name on before I could realize that I had already let go of it. Who knows? The important thing is that, although I still consider myself a Reasor girl, my heart doesn't hurt anymore when I think about how people don't know that I am. It's enough for me to know that I am.
P.S. Here are some more pictures: