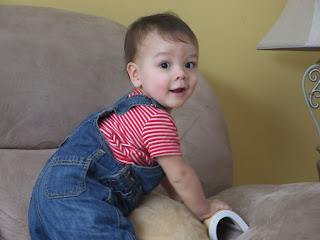 Yes, it's already been an entire year since Reasor was born, and what a year it has been. Born in Utah, we moved to Georgia when he was just 5 week old and by the time he was 5 months, he had flown in a plane 5 times! Mobility-wise, he started army crawling at 6 months, normal crawling at 7 months, standing up unassisted and walking around furniture at 9 months, then taking steps while pushing a chair at 10 months. Then, just a few days before his 1st birthday, he took his very first steps:

He still prefers crawling, but he's getting the hang of it. Happy Birthday, Reasor! 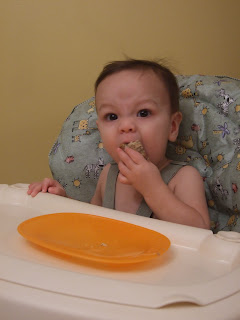 Snow in Atlanta is rare. Getting 3-4" in one night plus freezing rain the next day is pretty much a catastrophe. You may be thinking, "You wimps! Can't you handle a little bit of white stuff?" At first, I thought the exact same thing - and now chuckle at the fact that I have had 3 snow days and counting. But as I smiled, looking out our large picture window at the white blanket of wintry goodness, I realized one thing: if there are no snow plows to clear the roads, it's not safe - no matter how much winter driving experience you have. Not many vehicles can actually drive on a sheet of ice.

Atlanta-Journal Constitution article
[pictures]
Think about it: Up north, what happens after a snow storm? An army of trucks plow the snow off the roads and then sprinkle them with salt and/or sand. What happens if your city of 5.5 million only has a handful of such trucks? Emergency routes and interstates get the first priority, then if they have time, major roads come next. Most roads will never see a plow before the snow and ice melt. The problem is that we've had freezing temperatures for most of the past 3 days. Snowstorms like these come every 10-15 years, so buying more trucks is a waste of taxpayer dollars.
I was supposed to go to work today, starting a noon. Our road, of course, was not clear, but at least the two major roads I take to work had one clear lane in each direction, though quite slick. When I made it to work, crews were working on clearing off the ice sheet that covered the entire lot, and I was told that the department had decided not to open for the day.
Meanwhile, I've had tons of time to spend with the kids and play outside in the snow. We love it. Snowstorms are manageable when the roads are cleared for you. When they're not, just hope you don't have to go anywhere.