I assume that many already know this, but I'm sure there are also many others (ie. Talyn) who just don't realize it. In any case, we all forget this concept once in a while.

Whether you're a tourist or a local, it's always nice to look for events and other attractions to pass the time. More often than not, one can find events that are low-cost or even free. But before you gloat to your neighbor about how little you paid, remember the money you paid for everything else: drinks, food, pictures, and little novelties.

Ok ok, I admit there's nothing wrong with buying a souvenir or two, or getting some food & drink to prevent starvation, but there's one thing to keep in mind. Once they attract you, they'll do their best to milk you of all your hard-earned money.

Don't believe me? Take, for instance, a bottle of water. This costs a mere 50 cents in a regular grocery store. The same bottle of water can cost up to $4 at your local sporting event. Just think of the money you save if you just go to the grocery store ahead of time (and even more if you don't mind tap water).

Now that I've pretty much proved my point, let's go on to my secondary point: Talyn is naive.

Example #1: We're walking from Grand Place in Brussels, Belgium, towards the famous Mannekin Pis statue, which is only a few blocks away. Suddenly, a man dressed up exactly like the Van Gogh statue beside him, invites Talyn to take a picture with him. I oblige and take the camera out to take the picture. That wouldn't have been the best time to protest and make it seem like I'm a cheap husband. Of course, he asks for â¬2 to be put in his pot, and Talyn was completely surprised. "He charged us to take a picture with him?" she asked. 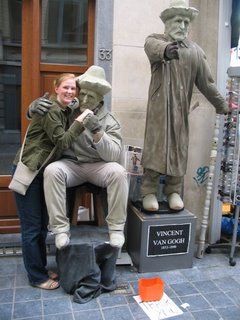 Example #2: As we were looking for things to do in Salt Lake on a Friday night, we found that the Utah Grizzlies were playing. Since it's the ECHL (I don't even know what that stands for), we were able to get some really inexpensive tickets. And we love watching hockey. Well, they were having a $1 concession night, and we decided to check it out. A $1 hotdog, $1 taco, and 2 for $1 wings. Talyn wanted to get the wings, so we ordered some. Well, 2. (you should've seen the look on the guy's face when we told him we only wanted 2) Again, I didn't want to seem like the cheap husband. Apparently, Talyn thought, "Wow, 2 orders of wings for $1, that's a great deal!" At a hockey game? Yeah, right.

Just remember: they attract you, then they milk you. So either plan ahead by preparing food, bringing water, etc., or go with bulging wallets.

We went to a roller rink with the 4th, 5th, and 6th graders for Halloween instead of having a party. It was a super-duper lot of fun! We only had a few minor injuries. The last time I went roller skating was in 5th grade gym class. I'm surprised I came out alive this time since I spent most of my time hanging onto/tripping over 4th graders who couldn't stay up.

Remember the Snowball? When boys had to skate with girls holding hands? The way I remember it, the Gym teacher made us all do it. There wasn't a choice. Mostly we all either didn't like it, or pretended we didn't. It never really made you feel good to have a boy come up to you, ask you to skate, and then make gagging noises the whole time, but I was always realistic and knew I wasn't being asked because anyone wanted to hold my hand, rather because Mr. Larsen made them. At any rate, it started there. I eventually made a decision to stop waiting for boys to do anything about it and took matters into my own hands.

All through my adolescence, whenever I was supposed to be waiting for a boy to ask me, I made sure to ask someone before I could notice that nobody was coming for me. I think that's one of the best things I ever did. Then I never had to sit out sulking that nobody wanted to ask me. At stake dances and the very few school dances I attended, it was a rare occasion indeed when a gentleman could ask me to dance before I asked someone myself. That made the dance all the more special, because it was hard to beat me to the chase. Now, naturally, as a big chicken I almost always asked the boys who were going to sit out the dance if I didn't ask them. I spent my time including the frightened boys. (If, by some chance, you're reading this, and you're one of the boys I asked, please consider yourself an exception. After a while I started occasionally asking the boys I really wanted to ask.)

My Senior year, keeping with the tradition, I got myself my own prom date rather than waiting around for nobody to ask me. It was a very good idea. That way I was in charge of my own fate. We had dinner with a group of my friends and they were all in awe at the fact that I had a date that pulled my chair out for me. Where did I get him? Yes, where did I get him. Kudos to me.

Eventually I became so breath-takingly beautiful that I didn't have to ask the guys anymore. (Read: eventually I got older and my reflexes slowed allowing the occasional young man to ask me to something before I already had a date lined up.) Even more eventually, Kevin asked me out. He asked me first, and then I returned the favor. At any rate, we fell deeply and helplessly in love with each other and I haven't had to worry about this topic since. That is until recently.

So, there I was at the roller rink, once again working to include the frightened ones. The D.J. announces that they will be starting the Snowball, and all of the gentlemen need to pick a young lady to skate with. I'm ready to get off of the rink and let the kids do their thing when the cutest boy in the fifth grade comes up to me and asks me to skate with him. Then, instead of proceeding to gag and pretend I wasn't there, he skates around to all of his friends proclaiming, "Look! I got Mrs. Wong!" Maybe all of that feigned confidence is finally paying off. Maybe I really have become breath-takingly beautiful. More likely he asked me for the same reason the boys let me play basketball with them at recess. (I'm tall and I can get all of the rebounds.) At any rate, I sure felt special. 5th grade boys should act like that more often. :) Then again, so should 5th grade girls.

Relive our summer in Europe without having to read a word! Feel free to leave comments...

If you're scratching your head, wondering how to see these pictures, just click here!