Tiling the shower was another one of those "not-absolutely-necessary-but-would-be-nice-to-do" kind of projects. The old tub wall surround was a cheap plastic glued-on kind which was decent enough to do its job. But slowly, the glue started to lose its stick and the piece that connected the plastic to the cast-iron tub was coming off. It was time for an upgrade.

At first, Talyn absolutely didn't want tile because of the bad experiences she's had with tile showers in the past. For example, our old apartment had mold in the grout that they had simply covered over with clear caulk. You could see the mold just fine but you couldn't do anything about it! Talyn likes a clean bathroom, and if the shower can't stay clean, nothing else matters. Well, turns out that if you seal the grout well, you shouldn't have to worry about moldy grout. Our neighbor Chad convinced us that tiling was easy to clean & fun to do. And if you're willing to put in the time & effort (which we were), it's not too expensive.

We chose the least expensive tile at Lowe's - 4x4" glossy biscuit glazed ceramic tile for only 14 cents each, plus got some Mexican tiles online as accent tile. The total for all of the materials - the tile, new backerboards (to protect the studs, etc.), new faucet kit, and other supplies - cost us a little over $400. Add to that 50 hours of work, and it's not a cheap project, but not too expensive either. 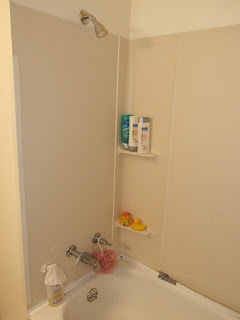 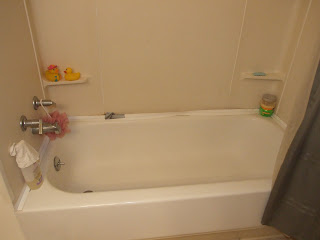 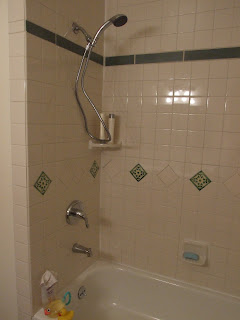 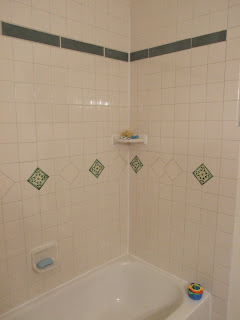 It was a huge relief to finally get it done. 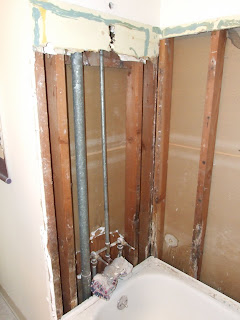 If you look at the bottom of the studs, you can see some black mold...ewww... Just spray it with a 1-to-1 mixture of bleach & water and scrub with an old brush (which you should throw away afterwards), and you should be good. 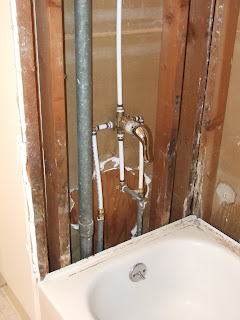 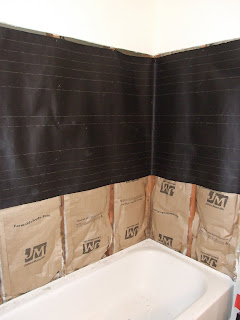 Since houses from the 1950's generally didn't have much insulation, we got some and put them into the exterior wall (right) and the wall that the baby's room shares. Then we put on tar felt, which acts as a moisture barrier in addition to the hardiebacker board. 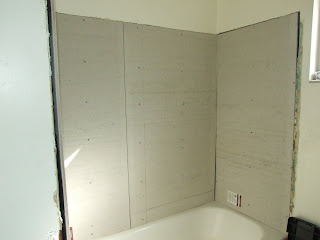 The hardiebacker & the tar felt protect the studs & walls from moisture. 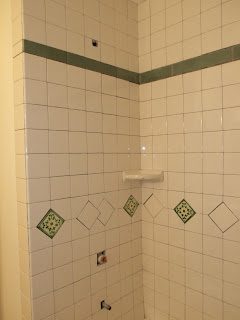 After laying the tile, before the grout, sealer, & caulk are applied. 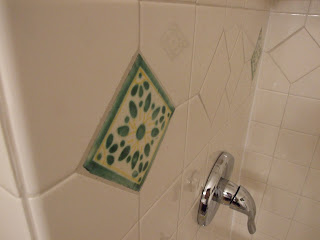 The finished product!
I really didn't know how long this project would take, but I didn't think it'd take this long! Since I could only work during the evenings & on Saturdays, it took me about a week and a half. During that time, we never took a shower... (don't worry, we still took baths)

And...to see for yourself:
So now that I have bricklaying, electrical, plumbing, and tiling under my belt, what's next?

The squeaky wheel gets the grease

That's what they say anyway. For much of my life I had my doubts. I always thought a more truthful maxim would be "the squeaky wheel is the one everybody thinks is annoying." I grew up in a family where most of us didn't know how to squeak. My mom does a pretty good job, but the rest of us are highly practiced at muffling in order to avoid being the squeaky one.

Many of my childhood friends were excellent screechers. Thus many of my childhood friendships consisted of me doing everything my friends said whether I wanted to or not. I would continue to do so for months or years until my mom, who has spend much of her life trying to decipher muffled squeaks, would figure it out and go squeak for me. (Note: I'm not talking about bad things. I didn't usually do those...well at least not because my friends wanted me to. When my friends wanted to do things I thought were wrong I was often found hiding in the bathroom hoping everyone forgot about me so I wouldn't have to be a squeaky wheel.)

Now, it's to my mom's credit that she works hard to try to understand the muffled creaks. I have found that, in general, squeakers assume that if you're not squeaking, you haven't got anything to squeak about. Case in point: Once on vacation one of the activities was to go see the sea turtles in a little bay while they were fed. My friend and I decided not to go, based basically on our non-squeakiness. We knew that we would go there and then get shoved and jostled to the back where we couldn't see. Our other friend told us, that if that happened to her, she'd just push her way back to the front. She didn't understand that we just couldn't do that. It wasn't the kind of thing we did. In fact, she assumed that because the people she would have pushed in front of didn't say anything, they didn't mind. It's hard for us to understand problems we don't have. In fact, I'm sure she would have thought I was insane had I divulged the fact that had someone stepped in front of me and asked if I could still see, I probably would have fibbed and said I could. She might have fainted in disbelief had I told her the true story of how my sister, when at a friend's house, said "no thank you" when someone offered her mayonnaise in order to avoid even the slightest creak.

Mufflers on the other hand seem to have a much better time hearing silenced peeps. If not hearing them, they are at least much better at realizing that there's probably some silent peep-age going on and to do what they can to grease those silent wheels. That's why Daddy-o's got the advantage over mom on understanding the things we don't say. However, it would be an extremely rare occasion for him to go squeak for you like mom did. He did sometimes, and he was good at it, but mom was the one people expected to squeak for us. (She was also the one a 13-year-old girl occasionally had to pretend she didn't belong to in order to avoid inevitable adolescent embarrassment.)

Of course, we don't live in a world where you can categorize people into two easy groups. People are willing to squeak in different situations. My mom spoke up for us a whole lot more often than she did for herself. I wasn't ever too bad at whining about things to people that weren't involved and couldn't help me. (This is known as gossip.) There's a girl I know that I find really squeaky, and someone that knows her very well thinks she's too much of a push-over. I bet I could find lots of people who can stand up to their own mom, but not their mother-in-law, or visa versa.

I, coming from a family of mufflers, had a difficult time entering a family of assertive squeakers. Kevin knows me well enough to feel the vibrations of my squeaks before they make a sound (That's probably in the top 5 reasons I married him), but you can't live your life waiting for someone to squeak for you. "Hey! Would you give her some grease already? She's not making any noise, but she sure could use some." You especially can't do that among assertive squeakers, because they look at you and their eyes say, "Why didn't you just say something?" and then you feel all pathetic. I feel I've made great strides in my squeaking ability since joining the Wongs. I consider that a good thing. I just hope it doesn't interfere with my desire to always consider the mufflers, nor do I want to become the annoying wheel.

It's a little embarrassing to admit this, but probably the main reason I did natural, epidural-free, childbirth, is because I didn't want to be hooked up to a bunch of stuff and have to ask somebody when I needed things. (I wish I could claim it was all about Alena's health...) 29 hours of labor was easier for me than pressing that red button and squeaking. Someone asked me if Kevin was a good labor coach. He didn't count my breathing for me or anything, but he did a fabulous job squeaking for me, which is exactly what I needed at the time.

Finally, to the event that got me to write this enormously long post that I'm sure Courtlin didn't read because she only looks at the pictures. I just want to announce that when recently in the hospital, I pressed the red button and asked if someone could unhook me from my various cords so I could go to the bathroom. Then, when they didn't come, I did it again. AND when I spilled a bucket of water on the floor while in there, rather than trying to mop it up with toilet paper as my old muffle-y self would have done, I hailed someone in the hallway to let them know that there was a mess in there. My conclusion is, the squeaky wheel is the one that gets the grease, and the one everyone thinks is annoying. Sometimes it's worth it. So, thank you, Wongs. I give you the credit for the fact that I didn't wet my gown. I'm sure the nurses thank you as well.

Happy Year of the Ox! Though the new year started on Jan 26 this year, celebrations continue for 15 days in China, so I'm not even late. Nor was our cousin dinner at Andrew & Liew's place, which was last Sunday. We had a scrumptious meal and had a great time. Alena & Andersen had a great time together too. We found them reading together quietly:

I posted the entire video because they're so cute. We also gave her Lucky Money, and she was much more efficient at opening the envelope than last year. 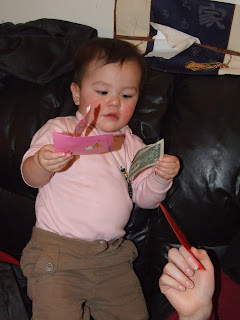 Alena doesn't really pose for pictures. She either doesn't even look at the camera or just begs to see the camera. We should have one of those hidden camera crews that records every precious moment in our lives. Or at least a secret camera in my glasses frame. Happy Chinese New Year!