In the last 7 days:
Alena finally (after 7 months) figured out what potty training was. We've had 2 accident free days since. !!!!!!! Now we just need to tackle public restrooms and nighttime.
Reasor slept for 4 hours in a row twice in one night. One 4 hour sleep stretch is an extra special treat. Two was nothing short of miraculous.
The scale told me there are only 10 pounds of this last pregnancy left. 25 down, 10 to go. Yipee!! My pants and recent photographs don't confirm this information, but we're believing the scale for now.
Kevin got to stay home from work twice because of some problems with the server. One of my favorite parts of this? Super yummy dinners. I also like having him around.
I baked some super yummy bread. I've been experimenting and had started to think that maybe I just don't have the special bread thingy that one must have to bake good bread. This most recent batch would indicate otherwise.
I found what I was looking for in a milk shake. Due to Atlanta's lack of Artic Circles I was worried I wouldn't find my perfect shake. I found it today, and it's really close to home.
It appears I'm on a roll. I also found exactly the Doctor I want for myself, but according to her website she's not accepting new patients. I called and left a message and with this string of good news I'm fully expecting her to call back and say she'll take me . . . and my children. What else could the fact that every time I call to make an appointment with another Doctor they're closed mean? (Answer: that doctor's have really annoying 2 hour lunch breaks.)

For the first time in many years, we went to the circus when it came to town. It was actually a lot more entertaining than we thought it would be, and though Alena didn't seem to be paying much attention, she talked about it nonstop on the way home. Reasor must have learned something there too. I mean, how did he manage to get from this: 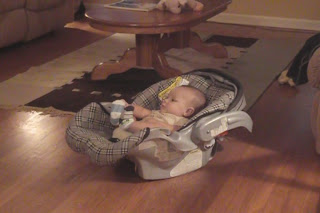 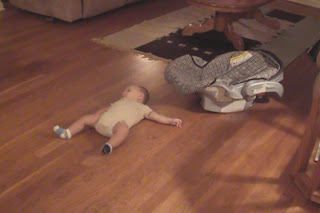 Good thing he was willing to divulge his trickery so we don't just sit around scratching our heads.