A Taste for Chocolate 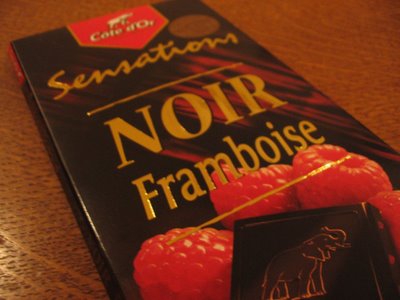 When one hears the word, "Belgium," several things come to mind: fries, waffles, pastries, lace, and invariably, chocolates. I've had the lifelong misfortune of being allergic to dairy products - not an intolerance to lactose, but an allergy to milk protein (caseine), which is even contained in other foods such as canned meats (except Spam, which, contrary to popular belief, is quite good when prepared properly). I came to Belgium expecting to enjoy the fries & the waffles, and leave the chocolates to everyone else. However, my curiousity got the best of me, and I started looking at the ingredients of Nutella (a hazelnut chocolate spread) and similar products, and I found one that had no milk! That lead to more important discoveries. CÃ´te d'or, the brand of the spread, is a popular chocolate brand here, so I checked out their regular dark chocolates - they also contained no milk!! I later found out from a Belgian that real chocolate (that is, dark chocolate, not milk chocolate) usually doesn't have milk! What a discovery! It has opened many doors of opportunity and has awaken a liking for chocolate in my tastebuds - a interest that hadn't before existed. I suppose that, of all places, this is the best place to have first tasted chocolates. 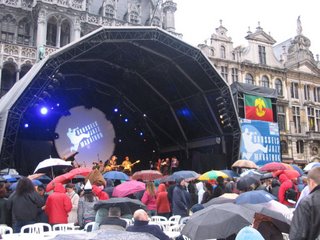 The annual Brussels Jazz Marathon is a spectacular event for jazz lovers everywhere. Where else can you see up to 400 artists/groups at 125 different concerts, absolutely free? I knew that this was an event not to be missed, so I put aside plenty of time last weekend to go. The concerts were organized in different genres: traditional, modern, blues, and latino, and they were all of top quality. There's nothing like good jazz music to soothe the soul. We had the freedom of going to many different concerts at different restaurants, bars, and at such public places as the well-known Grand Place. It was quite the experience.

One of the scariest things about moving to a new country is making new friends. Sure, it's easy enough to meet your neighbors and say hi to them when you walk outside, but it's another thing to actually get to know people. If it weren't for the church, getting to know people here would be very hard for me.

But the gospel is the same wherever you go, in no matter what language. And that foundation brings people with entirely different backgrounds closer together. Instant friends are made, and people understand each other more easily. When I first came to Belgium, I was excited about the chance I'd have to talk to people in French. But there is only so much you can say to a shopkeeper or a waiter - and there is not too much substance to the conversation. But I was excited to go to church to meet the members of the church. There I would learn about where they came from and what they do. They, in turn would strive to get to know me, and a friendship is formed. There is strength in the church and its members. We come together to edify and lift each other up - when we have the same goal, we can all work together.

The Capital of the European Union 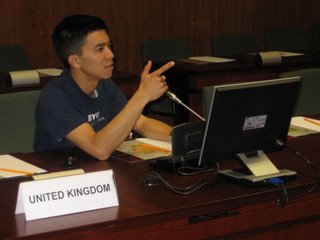 Not all people know that Brussels in the capital of the EU (European Union), which now has 25 member states, and more on the way. And perhaps even fewer know that the buildings of the EU are only open to the public at most once a year. So, being the big political buff that I am (or maybe not), I decided to go to this Open Day and learn a little more about this side of the world. I mean, I did just finish learning about the Founding and American government - why stop now?

First of all, there are several different buildings in the complex, and each has its own function. The European Council is where all of the country representatives meet to discuss important matters. As you can see to the right, I had the privilege of arguing in favor of the United Kingdom, even if I've only been there a mere 3 hours (and in the London-Heathrow airport, no less). I learned that the presidency of the EU systematically changes every 6 months (how's that for a turnover rate), and the country in the presidency has the privilege of decorating Floor 50. (unfortunately, the building has nowhere near 50 floors - the Floor 50 is in fact, the 5th floor) Currently, Austria is in the presidency, and they have decorated the floor with such artifacts as some of the original manuscripts of Beethoven & Mozart. It was very interesting to see.

The European Commission is where they deal with such matters in the EU as humanitarian aid, agriculture, etc. Finally, there's the European Parliament, but I'm not too sure what they do there.

All in all, it was a great visit, which expanded my political mind and opened my eyes. I left with free juice (which was surprising, because not even drinking water or using the public bathrooms are free) and a copy of the EU constitution (which is much longer than the US Constitution), plus free stuff galore. Needless to say, I left happy. 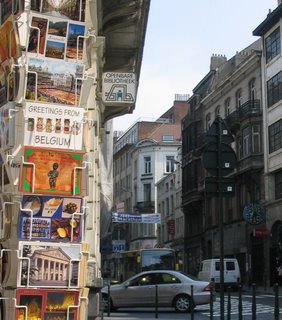 Brussels is a beautiful city with a rich cultural heritage, and is home to almost a million people from many different countries. It is the capital of the European Union and its official languages are Dutch & French. As my first time in Europe and really the first time I've live outside of North America, there are a few things that have caught my attention.

Language
For the day that I've been here so far, I've noticed that the majority of the people speak French, which is what I expected. Luckily, they understand my French, but I can't help but wonder if they know right away that I'm a foreigner. (note: I've seen a good number of Asians speaking French around here) With the exception of the library, I've spoken French at all of the places I've been too, including stores & restaurant. From what I'm told, the Dutch speakers can speak better English than the French speakers can. Those French prefer to stick to their own language.

Transportation
It is quite well known that most countries outside of North America has excellent public transportation, and Belgium is no exception. Trams rattle the windows of my quaint apartment every few minutes, and those are only a few of the choices one has to get around the city. In addition to trams, which run above the ground on electricity, there are the metro (subway), busses, taxis, and trains. One only has to wait a few minutes before getting on one of these, and they are very efficient.

There are also a lot of cars in Brussels, and parking is a problem. Unless, of course, you have a SMART car, which is barely 2m (6ft) long. "Quel problÃ¨me de parking?" a popular billboard says. Streets are narrow and drivers are crazy. Road rage is common. So is honking. One can easily see the emphasis on public transportation as many streets have the tram tracks in the middle of the street with only one lane for each direction given to cars (busses & trucks can drive along the tracks). Of course, that doesn't prevent anyone from driving up the curb and driving on the tracks, at least for a little while. Pedestrians jay-walk all the time, and cars slow down for them without any hassle.

Food
Small markets are common, but there are a few grocery stores around. Prices here are a little higher than in the US, but most things are still reasonable if you shop around. Oranges typically go for â¬1/kg, baguettes cost â¬0,60, and waffles are â¬0,60 or, if you prefer them hot, â¬1,50 at any of the many waffle stands along the streets. The waffles are everything they're made out to be. Hot and crispy on the outside, soft and slightly chewy on the inside. Most are coated with a sugary syrup, but you can also get them chocolate dipped... (I won't be trying that anytime soon) Fries are also common (with their specialty being "moules et frites" or "mussels and fries"), and I had the joy of trying them tonight (but just the fries - the mussels will have to wait). Lesson learned - going to tourist attractions: good; going to a restaurant close to the attraction: bad. The fries were â¬2,30, but we were charged â¬0,70 each for mayonnaise & ketchup (which are thicker and more flavorful than in North America) - that's crazy, but at least they were good. Talk about a tourist trap. And Belgian chocolates? I guess I'll just have to wait for Talyn to get here so she can give her opinion.

Architecture
The buildings here are quite amazing. There are many gothic cathedrals with impressive and intricate sculptures and decoration. The architecture of parliament buildings, malls, and even parks are all of such high quality - it's as if I were in Europe...oh wait... Cobblestone streets and sidewalks are common, which gives everything a very historic feel. (you can probably tell that I grew up in North America)

Those are just some of my first impressions on Brussels - there will be plenty more to come!