Oops. I accidently won a prize, and with it comes certain responsibilities.

So...3 of the people who comment on this post earn a handmade prize. Being as I'm not crafty, that means a handmade, edible prize. There is one condition: you have to offer a similar reward to your friends. I'm changing the rules just a bit in hopes of attracting more comments. You don't need to have a blog, you can do it through email. You have 1 year from the time you select your winners before they need to receive a prize from you. It's a pay it forward deal. The winners will be selected randomly on a random day, or I might just pick favorites...We'll see. Let the games begin!

Of Pearls and Powertools

Kevin and I found it amusing when a friend of ours made sure to direct his compliment on out new washer and dryer to me instead of Kevin. We aren't one of those traditional couples. We haven't divided the roles "traditionally". Kevin enjoys doing, or just does some "girl things" (cooking, dishes) while I enjoy doing or just do some "boy things" (basketball, plumbing). And then we trade. I guess you could call us modern, but we aren't one of those "modern" couples either.

I always thought it was funny around father's day that the ads would claim to know exactly what my dad wanted. He wants power tools and golf clubs just like "every other dad" right? As it turns out, my dad wants some mystery item I can't afford. At least that's what he always told me, which is why he always got something made out of the colored paper in the studio.

When I married Kevin I didn't think he was the kind of guy that wanted power tools and golf clubs either. He would've rather received a nice set of Chinese dishes. The other week though, he bought a set of power tools. We needed them, really, to do all of the things we want to on this house, but I was impressed with how happy it made him to be the owner of a cordless drill and jig saw. When I married Kevin, I didn't think I was was the kind of girl who wanted diamonds and sapphires for my anniversary either. But Kevin bought me a string of pearls just because he's the best husband ever, and I was surprised how much I felt like one of the women in the commercials. I wasn't expecting pearls to make me feel that way. But they did anyway.

This is Alena's new happy noise. She very recently started squealing as well, but not often enough to catch it on tape. The clip is a little long, because it's hard for the mommy to cut anything out since she loves it all. Rest assured she already cut out more than a minute.

Kevin loves taking pictures of food. I think it might be his second favorite part of dinner. (He's not crazy. His favorite part is eating it probably.) I bet if he had more time to cook he'd be keeping one of those food blogs I love reading. Instead, I have more time to cook. I spend a whole lot more time reading those food blogs than writing one though. However, I've been particularly happy with some of my dinners as of late.

When I was a kid I used to think one of my interests was cooking. I would even write that as an "interest" on the questionnaires teachers make you fill out the first day of school. Truthfully though, I'm not interested in cooking. I'm interested in eating, particularly baked goods. Because I'm so interested in eating baked goods, I have come to know a bit about making them. I made a pretty darn good cake last weekend, if I do say so myself. My motivation? I wanted to eat a pretty darn good cake. I ended up having to share it, not because I like that sort of thing, but so that I don't end up "big as a house". I guess I might have liked sharing a picture of it and a recipe on a food blog. Too bad I already finished it off.

The main factor that precludes me from being a food blogger is that I have yet to gain a testimony of the importance of the appearance of the food. I don't care enough what it looks like to spend time on that. These days I've had to overcome that to some extent, because Kevin just might take a picture of it.

Put all that together (Desire to eat, desire not to be "big as a house", desire to make something at least nominally picture-worthy, and desire to validate my reading of food blogs) and you end up with a really yummy dinner occasionally. One yummy enough to take a picture of. Luckily, I don't have to spend all the time writing the recipes up here because we've got a recipe section on our website. I did want to draw your attention to some of the things that are/will be up there. Kevin took a great picture of "bacon wrapped barbecue shrimp" and I did a pretty good job making it picture worthy I think. I tweaked a recipe for a butternut squash dish from my favorite food blog (http://orangette.blogspot.com/2007/10/sneaky-sneaky.html). I didn't tweak it to make it better. I tweaked it, because, as usual, I didn't have all of the ingredients. It wasn't nearly as picture worthy as the one Orangette made, but it sure was tasty (not to mention good for me). I also invented a walnut-peach monkey bread in another attempt to figure out the secret family recipe my roommate used to make and use the peaches in my fruit drawer.

There you have it. I've been cooking. That's why my shower's not clean. 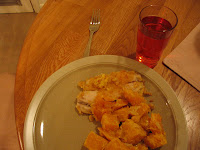 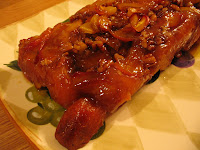 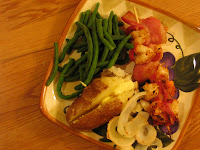