Here's another one of those blog/facebook tags. I figure you're smart enough to put the title and the post together and figure out what the directions were. If you read this blog and have not commented on any of the previous 10 posts, you are now tagged. You also have to comment on this post so I know who you are. (As if I'm the boss of my blog stalkers.)

1. I considered going down and numbering all of the 25 first, and then decided that would be completely ridiculous, and would end up probably annoying me because then I would have to use the down arrow rather than the enter key.

2. I was at and Enrichment meeting the other day, and it was supposed to be all uplifting, and it was, but the whole time I was just trying to stop myself from stomping to the front of the room and removing the ridiculous magnetic smiley face someone had put on the chalkboard.

3. I love chocolate cake donuts with chocolate frosting, but only really good ones. They have to be good ones, and just a bit crispy on the outside, which is strange because I don't like any of my other baked goods crispy...I guess donuts aren't baked.

4. One of the best things I ever did was to tell my fourth graders what my favorite candy bar was. (Symphony with almond and toffee.) Those guys know how to take a hint!

5. I have pretty flexible hips. I love Polynesian and belly dancing pretty much entirely due to that fact.

6. Said flexible hips are a source of much teasing when I got bowling. In bowling you spend a whole lot more time sitting around looking at people's behinds while they walk than you do actually bowling.

7. It takes me approximately 5 times longer to learn an adult's name than a child's. Whether the name is common or unique doesn't matter.

8. One spring term at the FLSR lots of pretty little blond girls moved into the Spanish house. I spent the entire 6 weeks not being able to tell which fake blond was which even while eating dinner with all of them 5 nights per week.

9. I blame the disorganization of my house on my little one even though It's really only partially her fault.

11. When girls get together and vent about their husbands, I can't really relate. I got a really good one, and I just can't deny it. He's got his quirks, but who doesn't?

12. It makes me really happy that Alena loves to dance and sing.

13. I was once a super picky eater, but have since come full circle. There are very few things I will not eat. (Those things include pickles and miracle whip.) It's a good thing I changed that, because I don't think Kevin would have married me had I been a picky eater.

14. Sometimes I crave chocolate cake with hot fudge, and I continue craving it until I get exactly that. It has gone on for weeks at times. The funny thing is I don't even like chocolate cake that much. That's why it's too bad you have to make a whole cake.

15. Since Alena was born I have been a pretty faithful 5 times per week exerciser, which is something I never imagined happening 5 years ago.

16. I really don't like hiking at all. That was actually one of my main complaints of BYU dating. People kept taking me hiking, where it was impossible for me to give off a good impression because I was grouchy just thinking about it. I like going for walks. I like nature. I just don't like hiking.

17. I don't know how to pick books for adults. I can point anyone to a great children's novel of any level, but every time I try to pick a book written for adults I end up really disappointed.

18. Much to Kevin's chagrin, I love corn dogs and fast food/take out chinese food. Much to his (and my waistline's) approval, to my recollection since getting married 3 and a half years ago I have only purchased two boxes of corn dogs, and have only eaten fast food chinese twice.

19. My least favorite part of the day is thinking of what to make for dinner.

20. I need 8 hours of sleep to function. 7 and a half necessitates a two hour afternoon nap.

21. I don't like socks, which is unfortunate in this house with uncarpeted floors in the winter.

22. I don't like to buy things. Sometimes I go without things that only cost a dollar that would actually be useful because I don't want to spend a dollar.

23. I pride myself in speedy grocery trips.

24. At six months pregnant I beat all but two of my sixth grade students in a flexibility test. It was the one where you sit on the floor and reach past your toes. I got 5 inches past, even with these long legs and that big belly. Flexibility was pretty much the only fitness test I ever passed growing up.

25. To my shame, I find it really fun to write about myself. Luckily I also think it's fun to read about you guys.

Allrecipes.com sent me an email with this picture:

With the caption, "Looking for the perfect dessert?"
Incidentally, I've been looking for that exact dessert ever since I ate it at the company Christmas party. Kevin and I have both been searching for recipes to make something that looks exactly like that. Naturally I clicked on the link, only to find recipes for a rum cake and a pudding cake I already know how to make. What? Where's the chocolate cheesecake? So I clicked around a bit, and discovered that in order to find that recipe I'd have to sift through their 11,329 "perfect dessert" recipes. Is that a dirty trick or what?

Add these to the list of things that don't make sense in this world.

1. Why on earth do they add food dyes to disgusting medicine for babies, who will be trying with all of their might to spit them all over everywhere? And especially why do they add them to disgusting medicines treating illnesses that cause you to throw up? Do they really think these little ones are dumb enough to think that a pretty red color means it's not disgusting after they've tasted it? Do they think that a nice pink tint makes vomit more fun? I've got news for 'em.

2. For what reason do they insist on continuing to manufacture medicines with that horrible cherry flavor? It would be better to leave it an icky natural medicinal flavor. (Both in regard to palatability and the future of red suckers everywhere. ) 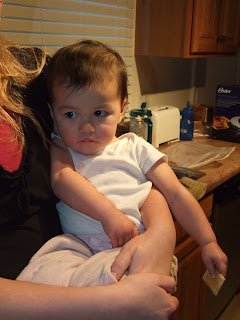 On Friday Alena had two firsts. Now, really firsts happen all the time for toddlers, but these are significant I think. Firstly as a hint of progress on the body fluids business, and secondly as a reminder not to get too excited for progress.

Alena came up to me Friday evening, pointed to her diaper, and said, "bye-pee." Sure enough, it was time for a change. I realize this doesn't mean she's ready for potty training today, but it does indicate that she is closer than she was last week.

A few minutes later the sweet little girl came up to me, placed her hands gently on my lap and threw up. It really is just one thing after another isn't it? As the spit-up ends, the really stinky diapers begin, and as we start to get a handle on the diaper situation childhood illnesses start hitting with a fury.

Christmas at the Wongs 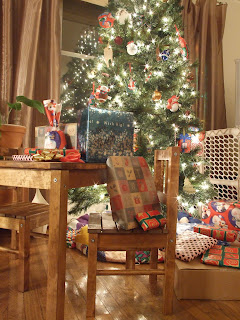 Well, Christmas has come & gone - and so has (almost) 3 weeks - and we finally have some videos of Alena on Christmas morning. I think she had a great time. Enjoy the videos, but be forewarned: they're long.
I think Alena was the most excited to put up the Christmas tree and ornaments. And to take them down.


Talyn & I were up at 8:30am and we had a relaxing half hour until Alena came out of dreamland. I don't think she knew what to expect on a Christmas morning.

I admit, I have no idea what a meerkat looks like. 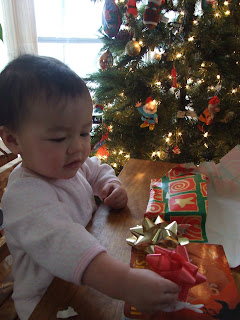 On to Grandma & Grandpa Wong's present: 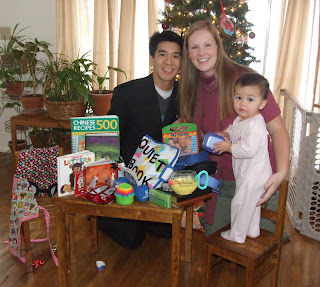