Shortly after we moved to Oshawa, I mentioned to my co-workers that I was going to commute to work by bike every day. "Even in the winter?" was the common reaction. Even in the winter. My boss doubted that I would, and I made a goal to prove him wrong.

Rewind to a month before our move. As I was doing my research, I found out that parking downtown was going to cost $90/month, insurance would be $70/month, then after you add in gas, car maintenance, etc., it was going to cost close to $200/month just to be able to drive to work. On the other hand, we were going to live just a few kilometres from work, and not only was there a locker room I could use, but also an bike room with secured access in the office building. I was told that winters in Oshawa were mild compared to Winnipeg standards and it didn't last nearly as long. In the end, we realized that we rarely needed both vehicles at the same time, so we decided to sell our car and I'd just bike to work every day.

If there's one thing I've learned, it's that you just adapt to your situation. When we had two vehicles, I got used to driving to work every day when we had both vehicles and I did it because it was much easier. If I had to choose each morning between driving or biking to work, I'd probably choose to drive more often than bike. But I don't have that option now. My alternatives are to take the bus (which is much too expensive to be worth it) or wake up my whole family and buckle them in the van so they could drive me to work. So I bike - and by doing so, I'm saving money, getting exercise, and reducing my carbon footprint. I mean, how many people do you know have a $0 commute? 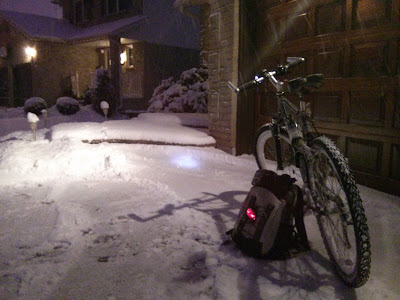 After 2.5 months of biking every day in the mild winter, I finally got put to the test - we had a snowstorm. It wasn't just a light dusting, either - we got a good 5cm in a matter of a few hours. I knew that, if I was going to prove myself as a bike commuter, this was the time. Talyn offered to pick me up and I politely declined. Part of the reason was that it was going to take 3 times as long for them to get in the van, drive in the slow traffic to my work, load the bike, and drive back home in more slow traffic - and risk getting stuck somewhere. And the other reason was that I wanted to prove that I would do it. That I wouldn't chicken out just because of a little white stuff.

Now before you get too concerned, I went on the sidewalk instead of the street and took it slowly. I wasn't going to take any chances with the slick streets. And to be completely honest, it was fun. (I know, I know, it'll get less and less fun each time, but still) It wasn't too cold* or windy and I even went faster than the cars who kept on spinning their wheels at the stop lights. The only mishap was that I couldn't see where the curb was at one intersection so I rode right into it and knocked the chain off the chain ring. It was an easy fix and I got home safely.

*since I have winter biking gear - cold-weather biking gloves, an under-the-helmet balaclava, water/windproof overpants, and other normal winter gear 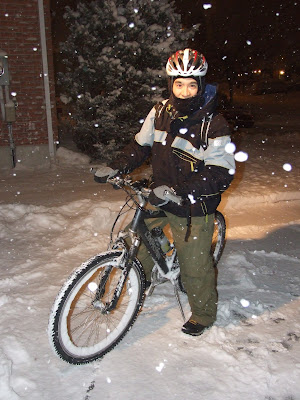 So am I crazy? Maybe a little, but it sure beats the alternative.