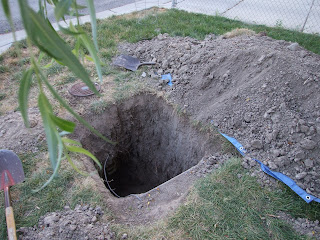 Talyn & Alena are in Minnesota for the week, so I'm playing the role of bachelor for a little while. Besides keeping up with Le Tour de France (which, I admit, can get quite addicting), I'm taking the opportunity to install our sprinkler system, which we've been procrastinating since last November. So far, all I've done is dig a big hole in our front yard - the water main is a whopping 5' underground! Luckily, my neighbors Chad & Gilbert have helped out, out of the goodness of their hearts. Gilbert digged quite a bit and encouraged me on by telling me that, in the time of the railroad, the Chinese outworked the Irish, who were bigger & stronger. I'm so glad I don't live in those times... 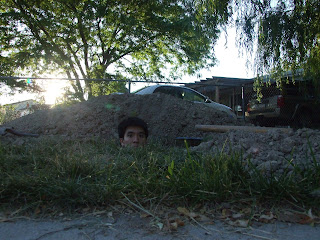 Me standing up in the hole - given my great height you can tell the hole is really deep
My favorite part so far of bachelorhood, though, is the voicemail I received the other day from Alena:
If for whatever reason the audio doesn't work, download the file here.
It makes me smile everytime I listen to it. Doesn't that just melt your heart?

So, I've got this little flower bed in front of my house. Actually I have three. This one in particular is pretty pathetic though, because the previous owner kept it beautiful with annuals. I'm am both too cheap and too lazy to plant annuals all the time, so I bought several perennials last fall to put in the bed. I planted 3 hosta and a bleeding heart. Contrary to my usual mistake, I planted them as far apart as the instructions said, rather than planting them closer while they're small and then wishing I had followed instruction later. Two hosta and the bleeding heart came up this year, albeit pretty pathetically. You see, the flowerbed, due to its being so close to the house, doesn't get much rain water, and since it rained the entire month of June here, we didn't water. Thus, although I had chosen plants good for shade, I neglected to give them any water. Anyway, because I followed instructions and then withheld water there were three pathetically tiny plants trying to brighten up a spot much too big for them by my front door. Yesterday I pulled the two or three weeds in the bed and then went on to work in the more weedy, but less pathetic flower beds. Aparently Alena decided to help out while I wasn't looking. I now have one measly, lopsided hosta trying to brighten the flower bed all by itself.

This morning I changed a poopy diaper and, as usual, told Alena I would be right back after taking it to the trash can outside. While outside I took the opportunity, since Alena was not standing at the door shouting for me to come back, to turn on a sprinkler. I suppose I took a couple of minutes putting it exactly where I wanted it. When I came back in it was eerily quiet. I started peeking around doorways to find Alena. I found her closed into her room, sitting on the rocking chair with a book. She looked up and said simply, "I'm reading." She then looked back at her book and started rocking.

Running and other such psysiological experiences

One of my 3 New Year's resolution was to run a 5k. Kevin jumped on board with that one and we have now completed it...dun dun dun!... 4 times. My goal the first time was to finish it. In under 40 minutes. I only had a time goal because that's the kind of goal people wanted me to have. I gave myself lots of time, since I really had no idea how long it would take me. I ran/walked it in just under 35 minutes. Then after I discovered I was addicted to running I did some research and started running based on my heart rate, aka: MUCH more slowly. I ran the second one with no walking in 37 minutes. We signed up for the third one at a time that was not ideal at all, because Kevin had some friends running it. So, going into it straight off vacation, having run twice in the three weeks preceding the race, I stopped to walk twice and came in at the back of the pack at 41 minutes. Ok, I was not in the pack. I was in the stragglers half a mile behind the pack. :) I then had 2 weeks to train hard for what I decided would be my last 5k this year. My goal was to once again run the whole thing, and reverse the trend of going slower each time. I met both goals coming in at just over 38 minutes.

All right. I admit it, that's not the whole story. In addition to shaking up my training with two vacations, in the middle there sometime I got pregnant. :) Yes, really. I just made an announcement, lost in the middle of a post with no pictures. (Now we'll know who really reads this thing.) It's sort of amazing to me how immediately after becoming pregnant my heart rate patterns went wacko. I attribute my extra minute on the last 5k to those wacko patterns. My only complaint is that nobody could tell I was pregnant. I mean, I knew the reason the guy in the giant tomato suit was going as slowly as I was, but he couldn't tell that I was blaming my time on pregnancy. The truth is though, it turns out I'm just slow. That's all there is to it. I know I'm not running up to my potential yet, but I've come to the conclusion that my potential is significantly less than those of the other folks running 5k's around here.

Ok, Ok. I know you don't want to read about running anymore. There is another thing I wanted to talk about. I had my second miscarriage in February. (That's why I was in the hospital for this post.) So, I was going into this pregnancy 1 for 3 in sucessful pregnancies. In other words I was skeptical for self preservation. Not to mention that I was bleeding again. So, I made an appointment as soon as I could. Many Doctors around here don't want to see you until 10 weeks, but mine said he'd take me at 8. So, I went in and they did the whole ultrasound thing. I was watching as all those indistinguishable green lines swirl around the screen, wondering how Dr.'s can ever tell what they are seeing, when my Dr. grabbed my by the shoulder and said excitedly, "There's a heartbeat!" It was like he was as excited as I was. As if he hadn't seen it hundreds of times before. It was fabulous. I love my Dr.

So, there you all have it. I'm due January 22, but I think it would be really, really, really cool if this one came a day early. That would be my Grandpa Lee's birthday, and Alena was born on my Grandma Wanda's birthday. That would be cool wouldn't it? But for now, I just get a little bit of a happy grimace every afternoon when morning sickness hits, because I know that I'm still pregnant. Yay!