Isn't it always the day after you deep clean the kitchen that you drop a ham on the floor and fling split pea soup all over the counters?

Perhaps I compromised my coordination when I opened a closet door directly into my forehead this morning. It would be an even better excuse if I had a pregnancy to blame this klutziness on.

Let's just hope Alena got Kevin's genes in this area.


(Prediction: at least 3 people will ask if this is an announcement in direct defiance of my post last year about nosiness and pregnancy.)

This is the video we turned in for our ward activity. I think it turned out pretty darn good, especially for less than 2 hours of rehearsal and filming and one day to edit. Enjoy.

We happened to walk by the "Honey, I shrunk the audience" attraction a few minutes before it was going to "start." According to the brochure, it would start on the hour, but the announcement inside informed us that it would start half an hour earlier than that. The brochure was right. What happened 30 minutes before was they herded us into a smaller room, repeatedly told us to stand closer and closer together. Then they turned off the lights and, as far as I could tell, the air conditioning. It wouldn't have been so bad except that strollers were not allowed. Now, I can hold a baby for half an hour, but I had left the blanket in the stroller.

Why on earth would I want a blanket in a crowded, dark, room with no air conditioning in Florida? I wanted a blanket because in North America it is culturally inappropriate to nurse a baby without one. If Disneyland were in South America, Africa, or the Pacific I wouldn't even have brought a blanket with me, but that's a different discussion.

I noticed I had forgotten the blanket when the baby started crying. I was hoping it was because she was hot, but no such luck. She was hungry. Now, had I figured out beforehand, that we weren't really "almost in the show" I could have just gone and gotten the blanket. However, the Disney Line Conspiracy was not yet clear to me, and they truly had me believing that the show was about to begin. I actually had about 20 minutes. The baby cried harder and harder, as the crowd pressed closer and closer, and the room got hotter and hotter.

I've learned to nurse discreetly, and I figured if they'd just let us into the room with the chairs and dimmed the lights I could nurse and no one would be the wiser. I tried to wait, but the baby cried harder, the crowd pressed closer, and the room got hotter. I finally gave in. I handed the baby to Kevin, opened up shop, took the baby back and fed her. Right there. Standing in the middle of dozens of tourists and their cameras. And do you know what? I didn't show any more skin than many of the others there, and considerably less than some. For about 30 seconds I was probably showing more than I was comfortable with, but I was certainly less scandalous than a great many people I saw on the trip.

Now, Disney, despite being deceptive in their lines, did have a nice thing set up for families with children under 42 inches. It's called a switch pass. This is how it works: one waits in line to go on a ride while the other stays with the shorties at the end of the ride. When the first parent finishes, the second goes through the fast pass line. The only way to improve that as far as I'm concerned would be to let us wait in line together. That would be more fun. It's no fun to wait in line by yourself, especially when your less than 42 in conversation starter ("How old is you baby?") isn't with you. You get used to having that social buffer with you.

I was editing the my interests on my facebook page and I wanted to add that I'm interested in belly dancing. As I thought about it I realized I'm also interested in Irish Dance, Latin Dance, and Polynesian Dance. I was trying to think of an adjective that combined all of those and I almost went with the adjective I had to describe my food interest, "exotic." Luckily, I'm not quite that dumb, and I caught myself and decided to instead say I was interested in "ethnic" dance.

And to prove that I'm not even that scandalous for being interested in belly dance, a-hem, oriental dance, I've got a little video for you. Please note the absence of scantily clad women.

Of all of the dance classes I have ever taken, which if I'm not mistaken is 9, this was the most fun, and I had the most success. I think I'll take it again with Nicole, and I'm considering joining the Saturday morning Belly-robics class. I'm not that excited about doing an intermediate class, as that would include performing, and that's when the bellies start showing. Maybe I can get one of those Jasmine Halloween costumes people used to wear in elementary school that had flesh colored fabric to cover the midriff. That or I could wear a skin colored swimming suit like our Barbies used to. (gasp!)

Chivalry, some say, is dead. I've long thought that if that's true, feminism killed it. In my Florida adventure, I found some loosely linked evidence to support my theory.

Chivalry in the LDS, Hispanic, Miami culture I saw is still very alive. For example: two different gentlemen opened the car door for me to get out of the car. I wasn't even on a date with them. I don't think that has ever happened to me before. I felt so very special. (Not "special," Dad.) However, I'm not sure it was worth the tradeoff.

Both of these gentlemen waited at the table to be served by their wife/mother, who had prepared, was serving, and would perform all of the cleanup of the meal. One of these men even told Kevin, upon finding out he cooked that he should have burned it the first time so he wouldn't be in his current predicament. He said it in jest, but after his wife named the two things he would do for her in the kitchen, I could see the truth in the joke. Don't get me wrong. Both were good men, kind men, intelligent, interesting men, they just didn't help out around the house, despite having excellent manners.

So I guess the question is whether you'd like your man to always have a hankie to offer you, or if you'd like him to help you fold the laundry and do the dishes. If you're especially lucky you might find a compromise: a man who can offer a Kleenex and opens your door to get in the car, but not out, and a man who cooks and cleans.

It appears, dear friends, that I win. Neener neener.

Here is the beginning of my vacation review. I'm not going to give you a play by play, because even if I were doing it for family history purposes, I would never read it again. Not to mention that Kevin already has the play by play in his journal. Instead I'm going to write little snippets of the things that crossed my mind in the course of our travels.

I think the highlight of the trip for me was fulfilling a dream I've had since childhood. I wasn't one of those fourth grade girls that loves horses, and I never wanted to become a marine biologist, but I DID always want to see a dolphin. You'd think I'd have done that in New Zealand or Fiji, but no such luck. So, when Kevin asked me what I wanted to do in Orlando, Disney World was not the answer. I told him I wanted to see a dolphin. When I told him I'd always wanted to, he took me seriously. Good for him. So that was the first thing we did in Orlando. I'm serious, we went into SeaWorld and headed to the dolphins. (OK, we stopped to look at the sting rays for about 30 seconds, but only because it was on the way.) I was so very excited I couldn't even take my eyes off of them. I was like a little kid, and it was so fun. 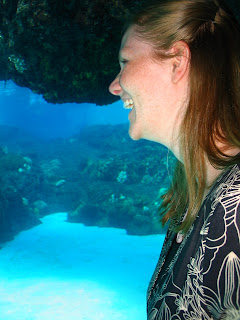 I was thinking about that idea quite a bit throughout the rest of the trip, in which we went to the beach several times. The thing about the beach is that you can't really hide anything. No matter how many times you've watched "What Not to Wear," there's only so much you can do with a swimsuit to flatter your body type. My mom used to make us wear T-shirts over our swimsuits (for the sun) but even that doesn't hide anything when it's wet.

Women in swimsuits are perhaps even more highly publicized than dolphins are. (Although I've never seen one on a Lisa Frank pencil box.) They are slender, bronze, cleavage-laden creatures. However, like dolphins, what you find in the magazines is not what you find on actual specimens at the beach. Some are slender and bronze, some are bronze and cleavage-laden, and some are just cleavage-laden. I did not see even one who had all three characteristics. And the only ones with flat little tummies were about 17 years old. However, there were many, many beautiful women there at the beach. I think in making this observation I have discovered a new treatment for poor body image. Attend the beach and do so often. You might just find out that it's possible to be graceful and beautiful and not look like a swimsuit model.

You also might find out how important it is it apply sunscreen to your legs as well as the rest of your body. I know I did.

On a more journal-y note, Alena also enjoyed SeaWorld. In fact, she like it so much that she graced Shamu with her very first applause:

P.S. Check out the new photos in the "photos" tab.

P.P.S. That floppy dorsal fin in not caused by captivity, it's genetic.